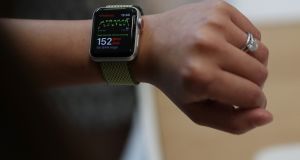 The new Apple watch that can make calls.

More than two years after releasing the Apple Watch, Apple has finally been able to replicate 1940s comic strip technology, an advance that analysts say will spur sales.

The Series 3 of the Apple Watch, released on Tuesday along with the much-anticipated iPhone X, features wireless LTE connectivity. That means customers will be able to make phone calls or send text messages from the watch without needing to have an iPhone nearby, as they do with earlier models.

The ability to make calls with a wristwatch has captured the imagination of tech enthusiasts at least since it was prominently featured in Dick Tracy, the comic about a private detective who, starting in 1946, used calls from his wrist to help bust bad guys.

“This has been our vision from the beginning,” chief operating officer Jeff Williams said at the launch event.

“Now you can go for a run with just your watch and still be connected. It’s really nice to know you can be reached if needed.”

To be sure, Samsung has sold smart watches with mobile data connectivity since 2014, but the first devices were bulky and suffered from poor battery life because the data connection consumed extra power. They also require a separate phone number.

Apple claims its new Series 3, on the other hand, will have up to 18 hours of battery life and is just a fraction of a millimeter thicker that its previous Series 2. And it will have the same phone number as a customer’s iPhone, which will still be required for the initial set up of the watch.

Apple said that all four major US.carriers will offer service for the watch, and AT&T and T-Mobile US both said it would cost an extra $10 a month.

Analysts generally believe the new connectivity could ignite sales, though there is little consensus as to how much.

At $399, the new watch is only slightly more expensive than the previous model, the $329 Series 2, which introduced standalone GPS capability. That $70 extra buys much more useful capabilities – including the ability to stream music from Apple Music.

“The third time is the charm for the watch,” said Bob O’Donnell of Techanalysis Research.

What may hold some consumers back is the monthly recurring charge, which would far exceed the extra cost of the Series 3 over older watches over time, said Brian Blau, an Apple analyst with Gartner. “Yes, you do have to pay for that extra data plan, but it sounds like the carriers are at least going to make it relatively easy to do,” Mr Blau said.

Apple does not say how many Apple Watches it sells. Bernstein analyst Toni Sacconaghi believes Apple will sell 12 million watches in its fiscal 2017 and 14 million to 15 million in fiscal 2018. Gene Munster with Loup Ventures predicted a much bigger bump, to 26 million units in 2018.

Either way, Apple is putting new pressure on smartwatch rivals such as Fitbit and Garmin, which would be hard-pressed from a technical and business standpoint to match Apple’s wireless features.

But the new Apple Watch still requires an iPhone, which Fitbit believes leaves it ample market room to sell wearable devices that work with all phones, not just iPhones. “With Android comprising approximately 80 per cent of the global smartphone market, broad compatibility remains a core differentiator for Fitbit,” the company said in a statement to Reuters.

Garmin did not immediately respond to a request for comment outside normal business hours.

The watch will remain a blip in Apple’s sales, which were $215 billion last year. But it may be taking its place as part of a family of products that Apple loyalists cannot do without – all by making a schoolboy fantasy from the 1940s into reality for the masses.

1 Mortgage arrears: Prevention is definitely better than cure
2 Why gift a son now if it eats into his tax-free inheritance threshold?
3 Big Four told to outline plans for audit split in UK by October
4 Stocktake: Playing poker with the day traders
5 Government to avoid ‘cliff-edge’ on Covid-19 payment changes
Real news has value SUBSCRIBE