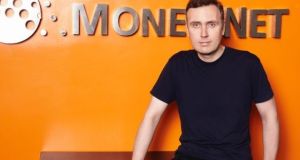 Money.net, a New York-headquartered company established and run by Irish man Morgan Downey that has emerged as a serious rival to the Bloomberg group, is looking to establish operations in Ireland next year.

The move comes as the online platform for financial news and data recently made its first acquisition and rolled out a new desktop application.

The company, which was founded by the Limerick-born businessman in 2014, has plans to set up a European headquarters in his home country during the first half of 2018. Mr Downey told The Irish Times the company will be looking to take on an initial 10 to 20 employees locally.

Mr Downey said the company was in “active discussions” with authorities here regarding the establishment of its European headquarters but added that no final location has been decided upon.

The terminal, which is the foundation for Michael Bloomberg’s $49.4 billion fortune, is used by over 320,000 subscribers globally with companies paying up to $24,000 a year to have one of the machines in their office. The Money.net alternative meanwhile, which has more than 83,000 subscribers, provides a similar array of information and tools for a flat fee of $150 a month.

Money.net last week acquired the technology of Scout Finance, a US firm that has a popular suite of mobile apps for finance professionals. Details of the deal were not disclosed but Scout Finance has raised at least $10 million in the last few years and has tens of thousands of registered users. Money.net has also just launched a new desktop application that integrates Dataminr, a tool that integrates real-time social media data, and Symphony, a messaging platform backed by a consortium of investment banks including Bank of America, Goldman Sachs, HSBC and Morgan Stanley

Mr Downey, who previously ran Bloomberg’s commodity division, said Money.net was continuing to chip away at his former employer’s subscriber base, as well as that of its main rival, Thomson Reuters.

Bloomberg’s terminal sales have been in decline for three years straight and the Limerick man claims the situation is only going to worsen.

“Just like Blackberry could see iPhones and Android phones gaining adoption, Bloomberg can see Money.Net and others outpacing them, but they are paralysed by their own hubris and outdated technology,” he said.

1 Air travel never going ‘back to way it was’
2 Should I switch bank now with Ulster Bank at risk of closing?
3 Will brother’s widow get half of our parents’ estate when they die?
4 ‘Tax war’ will hit Ireland if digital tax talks fail, OECD says
5 Banks face ‘hectic’ loan restructuring as payment breaks end, Goodbody warns
Real news has value SUBSCRIBE