Microsoft beats estimates for revenue and profits in first quarter 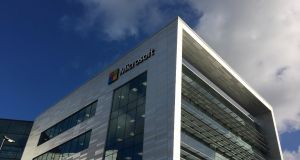 Microsoft shares, up more than 21 per cent over the past 12 months, rose 2.5 per cent in after-hours trading. Photograph: Bryan O’Brien

Microsoft beat Wall Street estimates for revenue and profit in its first quarter on Wednesday, as more businesses signed up for its Azure cloud computing services and Office 365 software.

Microsoft shares, up more than 21 per cent over the past 12 months, rose 2.5 per cent in after-hours trading. Much of Microsoft’s recent growth has been fuelled by its cloud computing business, which has benefited from companies rushing to shift their workloads to the cloud to cut data storage and software costs.

Azure has an 18 per cent share of the global cloud infrastructure market, making it the second-biggest provider of cloud services after Amazon’s Amazon Web Services, according to April estimates by research firm Canalys. However, the company’s flagship cloud product recorded slower growth from the previous quarter. Revenue growth in the first quarter ended September was 76 per cent, down from 89 per cent growth in the fourth quarter.

Microsoft’s focus on fast-growing cloud applications and platforms is helping it beat slowing demand for personal computers that has hurt sales of its popular Windows operating system.