Karlin Lillington: Billionaires are opposing taxation to help those they have displaced 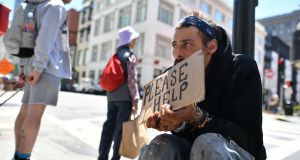 Anyone who visits San Francisco inevitably remarks with some shock about the bayside city’s homeless problem. Photograph: Josh Edelson/AFP/Getty Images

A proposition on San Francisco’s ballot on November 6th, which aims to help house the homeless by taxing businesses in the city, has become the focus of a roiling public argument between several of the city’s high-profile tech company chief executives.

Among them is Limerick’s Patrick Collison, the co-founder – with his brother John – of the multibillion dollar online payments company Stripe, which has its headquarters in San Francisco.

Proposition C would impose extra taxes on larger businesses and corporations – those earning more than $50 million in revenue annually – to raise $300 million a year towards targeted housing projects and to bolster services for the homeless.

San Francisco has an estimated 7,500 homeless people. That’s actually a decline on previous years, but anyone who visits San Francisco inevitably remarks with some shock about the bayside city’s homeless problem. That’s nothing new. The same occurred when I lived in the city some three decades ago and had visitors.

But tolerance has worn thin as the number of homeless visible on the streets, whether in tent encampments, in clusters hanging out in the city’s plazas and subway stations or panhandling individually, seems to have exploded.

Much of the friction is due to a shift in the types of companies and residents in the city.

When I lived there, much of the city’s money was concentrated in finance. Many who worked in financial services chose to live in the suburban communities north, south and east of San Francisco, commuting in daily.

The financial district incongruously butted up against the impoverished areas south of the major thoroughfare, Market Street. Alongside grubby brick buildings used for cheap light industry, the area was also full of dirt-cheap hotels and boarding houses, alleyways and wasteland under freeway overpasses, inhabited by the city’s poorest.

Not so now. First, the 1989 Loma Prieta earthquake brought down some of the ugliest freeway structures, opening up the area to attractive bay views. Then, in the 1990s, the old buildings, with their now-stylish industrial grit interiors, were cleaned up and taken over by the emerging internet and online media industry. The area was rechristened SoMa (for South of Market) and began to gentrify.

The area is utterly changed now, full of architectural-statement tech company headquarters and high-rise housing developments for the well-paid industry employees. A new generation of young employee wants to live in the city, not commute to it – or live in the city and commute south to other Silicon Valley employers – and that has driven up San Francisco’s always sky-high rents, forcing out working- and middle-class families.

These new buildings have also obliterated the only housing still available to the city’s poorer residents and removed the quieter hidden spaces where many of the homeless had lived. Hence the seemingly booming population. Homeless people simply have nowhere to go but the streets.

Fast-forward to 2018 and Prop C. In many quarters of San Francisco, there’s festering resentment towards both the tech industry and its stereotyped coffee-sipping, scooter-riding employees. Added to that the fact that as a sector, tech and its individual chief executives are not exactly known for charitable giving.

Why then concentrate your buildings and your employees in a city that has limited physical space?

That’s become the platform for what might seem an unlikely supporter for Prop C, Salesforce chief executive Marc Benioff, who has always been verbally pugnacious. Tech journalists know he almost always makes for good copy in keynotes or interviews. He has just built a massive skyscraper for his corporate headquarters in downtown San Francisco and has also long been known as an ardent supporter of charitable causes and corporate social responsibility.

Benioff has pumped a couple of million into supporting Prop C and has gone very public in lacerating the ungiving nature of many of the city’s tech billionaires – in particular, needling Twitter founder and chief executive Jack Dorsey and last week, Stripe’s Collison.

In response, Collison eventually issued a defence on the company’s website in which he made a point of not engaging in a personal fight but politely defended the company’s opposition to Prop C.

At the moment, the proposition looks set to win. I don’t know whether the proposition is the right solution to address the city’s homeless crisis. But the battle over the issue offers two important lessons.

First, as a general point, the tech industry clearly needs to engage more with the city and its problems, and needs to be a far better corporate citizen.

Second, there’s a rich irony in the fact that many of these companies have touted their role in making the world boundary-less, changing the working world to a more virtual space in which data can flow anywhere and people work from anywhere.

So why then concentrate your buildings and your employees in a city that, with sea on three sides, has limited physical space and is already breathtakingly expensive? Dublin, as it happens, suffers from many of the same constraints. Why don’t your companies make use of the technologies you tout, to have your employees telecommute? Or is all that just so much hype?