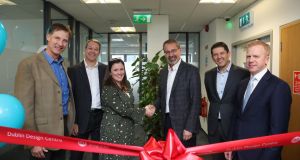 US computer chip maker Maxim Integrated will spend more than €23 million on a new design centre at its Irish base that could create up to 100 jobs.

San José, California-based Maxim makes semiconductors – the microchips that drive digital equipment including computers and smartphones – and had sales of about €2 billion last year.

The multinational confirmed on Wednesday that it is investing $25 million (€23.16 million) on building a new design centre at its Irish subsidiary, in Clonskeagh, Dublin.

Maxim said it was recruiting engineers to staff the new facility. The US company did not put a final figure on the number of jobs the centre is likely to create, but it is thought to be between 80 and 100.

The company explained that it would spend the $25 million mainly on recruiting workers, equipment and building the design centre, which will be the seventh such facility that Maxim has opened in Europe.

John Kirwan, Maxim Integrated’s vice-president of global customer operations, said he was “thrilled” that the company had chosen Dublin for its latest centre.

Martin Shanahan, chief executive of IDA Ireland, the State agency responsible for attracting multinationals such as Maxim to the Republic, said he was delighted the company had chosen to locate its design centre here.

“Tech talent and investment are integral to the company’s continued growth, and this investment will enhance the technology offering in the engineering and design space in Ireland, ” Mr Shanahan added.

Official figures released this week show that high-tech companies in the Republic employed more than 127,000 people by the end of last year.

Both the Central Bank and the Organisation for Economic Co-operation and Development pointed out recently that technology and pharmaceuticals were leading Irish export growth.

Maxim began trading in the early 1980s and floated on the New York Stock Exchange towards the end of that decade. It is an S&P 500 company and employs more than 7,000 people.

Global manufacturing slump as coronavirus shock deepens 11:24
Mother of invention: the new gadgets dreamt up to fight coronavirus 11:23
NTMA to raise billions of euro for State in bond sale to meet costs of Covid-19 crisis 10:36
Coronavirus: Journal Media to cut pay by up to 20 per cent 10:14
Euro zone factory activity crashed in March as coronavirus spread 09:53

1 Coronavirus: Notion of a rapid economic recovery is at best wishful thinking
2 Coronavirus: Journal Media to cut pay by up to 20 per cent
3 Nice to see you: Which is the best video calling option around?
4 Frontline bank workers to get pay top-ups during Covid-19 crisis
5 Irish and European shares slide on Trump comments and dividend suspensions
Real news has value SUBSCRIBE