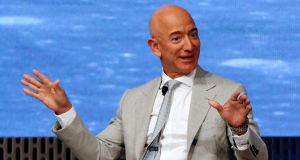 Jeff Bezos has sold $1.8 billion (€1.6 billion) worth of Amazon shares over the past few days, in the ecommerce chief’s first stock sale since his divorce.

Mr Bezos – who is the world’s richest person, according to Forbes – has lately cashed in about $1 billion worth of Amazon stock a year to fund his rocket venture, Blue Origin. In October last year he said he planned to spend “a little more” than that in 2019.

Blue Origin, which was founded in 2000 and is funded entirely by Mr Bezos, is targeting its first manned space flight on New Shepard, its reusable rocket, later this year.

In May Mr Bezos unveiled a new lunar lander, which he said was the first step towards colonising the moon. “It’s time to go back to the moon– this time to stay,” he said.

No specific reason for this week’s sale was given in a series of regulatory filings published late on Wednesday. Amazon declined to comment beyond the filings.

In April, Mr Bezos agreed a divorce settlement with his ex-wife MacKenzie that saw him retain three-quarters of his stake in Amazon. Ms Bezos said she would hand over all her interests in Blue Origin and the Washington Post newspaper to her former husband as part of the settlement, as well as her Amazon voting rights.

Following this week’s sales, Mr Bezos’s remaining Amazon stock holdings are worth about $109 billion, at Thursday’s opening price of around $1,878. The company’s shares have fallen since it reported a spike in expenses last week, due to its investment in one-day shipping.

Although Amazon’s net income in the three months to June rose by 3.6 per cent to $2.6 billion, earnings of $5.22 a share fell short of Wall Street’s estimate of $5.58, while its profit guidance for the current quarter also missed analysts’ projections.