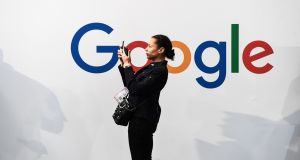 Alphabet’s cash is produced almost entirely by its search advertising business, which has been supplemented by strong growth from YouTube. Photograph: Getty

The corporate world has a new king of cash. The title for the company with the biggest financial reserves, held by Apple for a decade, has passed to Google’s parent, Alphabet, according to figures released in recent days.

The switch in leadership follows a concerted effort by the iPhone maker to reduce its liquid reserves, six years after it first came under pressure from activist investor Carl Icahn to pay out more of its cash hoard. Apple’s holdings of cash and marketable securities, net of debt, has fallen to $102 billion (€91.5 billion), down from a peak of $163 billion at the end of 2017.

Alphabet’s financial reserves have been moving in the opposite direction. At $117 billion, its cash pile has risen by almost $20 billion over the same period.

The rise of Google’s parent to the top of the corporate liquidity rankings puts its corporate wealth and power on conspicuous display at a politically sensitive moment. After being hit with €8.2 billion in antitrust fines to the European Union in the past two years, it now faces intense scrutiny in Washington.

The company’s preference for hoarding its money and spending it on trying to break into new markets, rather than using it to reward shareholders with buybacks or dividends, as Apple has done, also antagonises some investors.

“In general, their attempts to reinvent themselves with their new initiatives aren’t working out,” said Walter Price, a portfolio manager at Allianz Global Investors. “I wish they’d return more cash to shareholders and waste less.”

The cash build-up has come despite a surge in capital spending. At $25 billion last year – up 50 per cent from 2017 – much of the money has been pouring into real estate, as Google has added to its office holdings in cities such as New York and built data centres to support its growing cloud-computing business.

Chief financial officer Ruth Porat has been at pains to downplay the real-estate investments, stressing that they are a one-off and that, in a normal quarter, 70 per cent of capital spending goes into servers and other new equipment.

The infrastructure to support artificial intelligence that Google had been building “requires a tonne of compute power”, said Youssef Squali, an analyst at SunTrust Robinson Humphrey. But he added that, like some other big tech companies, it had seen higher spending on machine learning feed through directly into higher revenue. That had left Wall Street generally comfortable with the spending surge.

It is in areas beyond Google’s core business that the complaints persist. Alphabet’s cash is produced almost entirely by its search advertising business, which has been supplemented by strong growth from online video service YouTube.

By contrast, Google’s other businesses – such as cloud computing, smartphones and home automation – are believed to have been consuming cash. Alphabet has also lost $15 billion in the six years since disclosures began in businesses beside Google – something it describes as its “Other Bets”, ranging from the Waymo driverless car unit to the Verily healthcare division.

Google had done enough to “make the cut” in cloud computing, where it is chasing market leaders Amazon Web Services and Microsoft, said Mr Price. But he added that it had had little impact in breaking into other markets.

Until last week, Alphabet has also stood out among big tech companies for not taking a more aggressive stance on returning cash to shareholders following the passage of US tax reform at the end of 2017. The new law applied an immediate – though reduced – tax rate to US companies’ overseas cash reserves, in the process removing the incentive to sit on the money rather than start paying it out.

Apple has responded to the change by spending $122 billion on buying back stock and paying dividends in the past 18 months. Other companies to dig deep include Cisco Systems, which has cut its cash holdings from $35 billion at the time of the new tax law to only $11 billion.

Alphabet’s stock buybacks, by contrast, have been paltry. In the nearly four years since it began repurchasing its own stock, it has spent an average of only $1.7 billion a quarter.

In that time, it has handed out more new shares in the form of employee stock benefits than it has bought back through its repurchase programme. As a result, the payments have done nothing to lift its earnings per share – the reason investors generally welcome buybacks.

Things could be about to change. Last week, Alphabet said its board had added $25 billion to its stock buyback programme, taking total new repurchase authorisations to $37.5 billion since the start of this year.

Ms Porat said that the increase did not reflect any change in Alphabet’s financial priorities, and that its two top goals were unchanged: to invest in the long-term growth of its existing businesses and to support acquisitions. However, the move contributed to a strong stock price rebound on the same day that the company also reported a rebound in revenue growth, dispelling worries about a sharp secular slowdown in its advertising business.

Even the heightened rate of buybacks may not cap the growth in Alphabet’s cash mountain. Its free cash flow this year was forecast to top $30 billion, rising to almost $40 billion next year, said George Salmon, an analyst at Hargreaves Lansdown. The new buyback intentions “don’t represent a step change” big enough to actually reduce the company’s total reserves, he said.

Many investors are now counting on a steady increase in Alphabet’s stock repurchases as its search advertising business continues to mature – much as Apple responded to an end of growth in iPhone volumes with a more concerted effort to distribute its cash.

One potential avenue for using the money – making acquisitions – looks less likely given the regulatory backdrop, according to some investors. “The US government is going to take care of the M&A question by making it more difficult to do deals,” said Jim Tierney, a chief investment officer at AllianceBernstein. Along with growing maturing in the core business, that was likely to make the $25 billion repurchase authorisation announced last week “the tip of the iceberg”, he said.

Facebook, with less than half the cash reserves, has also turned its thoughts to distributing more of its excess cash, heavily outspending Google last year on stock repurchases.

“These are going to become free cash flow machines with nowhere to spend their money except on buybacks,” said Mr Tierney. – Copyright The Financial Times Limited 2019