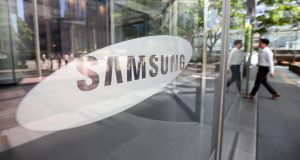 Net income fell 54 per cent from a year earlier to 5.06 trillion won ($3.8 billion) for the three months ended June, the Suwon, South Korea-based company said in a statement, while revenue dropped 4 per cent to 56.1 trillion won. Shares slid as much as 3.3 per cent.

The world’s largest maker of memory chips and smartphones has been hammered by geopolitical tensions and a wireless slump. The US-China trade war has rattled the global tech-supply chain and weighed down the price of memory chips used in phones and data centres. In addition, Japan restricted the export of materials used in chips and displays to Korea, raising concern over potential disruptions at Samsung and SK Hynix.

Samsung had planned to announce its three-year shareholder return policy on Wednesday, but put off the announcement until early next year, citing significant new challenges.

Its stock originally traded higher and then dropped lower during an investor call as Samsung said it’s facing uncertainty due to growing macroeconomic issues. Beyond the US-China dispute, Japan may announce further export curbs against South Korea this week.

Samsung did signal optimism about improvements for the memory business – its most profitable – for the rest of the year.

Chipmakers have been predicting a recovery in memory demand this year, but that’s been delayed amid the trade war and slower expansion of data centres.

The mobile division of the world’s largest smartphone maker posted a 42 per cent decline in operating income to 1.56 trillion won. Samsung said its profitability eroded because of intensifying competition in low-to-mid range markets, and vowed to launch successfully the Galaxy Note 10 and Galaxy Fold in the second half of this year.