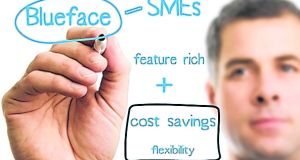 Dublin-based Blueface received € 10 million in investment from the BDO Development Capital Fund to support its international expansion. The fund has sold its shares as part of the merger.

The Irish cloud communications company Blueface has agreed to a $500 million merger with US rival Star2Star Communications to create a global competitor in the enterprise telephony market. The deal will see “significant” growth at the new company’s Dublin base.

The combined company will be called StarBlue and will have its headquarters in the US to reflect the larger size of Star2Star, which is based in Sarasota, Florida. Dublin will remain the EMEA headquarters for the enlarged group.

It is the second significant deal in the cloud communications market in the past three months after Cisco Systems’ $1.9 billion takeover of BroadSoft, which develops software that manages calls and collaborative tools such as group chats and video conferencing.

StarBlue will compete with BroadSoft by selling its software to larger telecoms companies. The company also sells directly to businesses including Pizza Hut, Enterprise Rent-A-Car and Dollar General.

The merger is expected to propel it into the top five companies in the market for “unified communications” products where it competes with other specialists including RingCentral and 8x8.

Mr Foy said that the merger was driven by a trend towards consolidation in the sector, and the need to be able to service customers globally.

“We recognised the need to partner up with another mighty force in north America,” he said, adding that Blueface had already built up quite a strong partnership with Star2Star.

Mr Foy said the combination with Star2Star would position the company on the global stage and strengthen its ability to invest locally.

“It positions us very well to compete with the giants in the space,” he said, adding that the next phase “will be very focused on the international development of the group”.

This will likely mean further growth for the company’s Irish operation. Blueface employs 70 people at its Dublin docklands location, but the deal will see it add a “significant” number of new hires, Mr Foy said.

Mr Foy did not disclose his stake in the new company. Another investor, Lord Edward Iveagh, an heir to the Guinness fortune, backed the 2011 management buyout of the company, and remains invested.

“The company has been very successful and we are sure that they will continue to grow in Ireland on the back of this,” said John MacNamara, manager of software and digital technologies at Enterprise Ireland.

One investor that has exited is the BDO Development Capital Fund. Blueface received €10 million in investment from fund to support its international expansion back in March of this year, and the fund has now exited, selling its shares as part of the merger. While Andrew Bourg, a partner with BDO did not disclose the return on investment, he said it was “significant”.

“We were delighted to be involved, even if it was shorter than imagined,” he said.

Since its launch in March 2014, BDO’s fund, which includes Bank of Ireland, Glanbia and CRH among its corporate partners, has performed strongly, returning 250 per cent on its investment in Version1, which it exited back in April 2017, and a similar gain on Lifes2Good, which was sold for €150 million in January 2017.

The €75 million fund is still invested in nine companies, including Multihog and Netwatch, and is currently looking to allocate less than a third of its value in a future pipeline of companies.

Such is the level of interest that Bourg says it is considering the launch of another €75 million BDO Development Capital Fund II later this year.