Sensata Technologies to close Carrickfergus plant with loss of 270 jobs 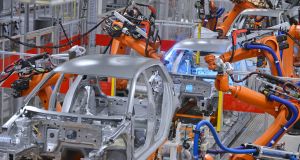 American electronics company Sensata Technologies is to close one of its operations in Northern Ireland early next year with the loss of 270 jobs.

Staff at Sensata’s Carrickfergus plant arrived in work on Friday to be told that there will be a “phased closure” of their workplace and they would be made redundant because of a “perfect storm of European market conditions”.

Sensata manufactures sensors, switches and controls for various industries. It has two sites in Northern Ireland, one in Antrim town and the other in Carrickfergus, which manufacture a range of Tire Pressure Monitoring Systems.

The company came to the North in 1988 via the acquisition of Schrader Electronics and employs 1,178 people across its two sites.

In 2018, it cut 125 jobs at Schrader Electronics but the scale and severity of its latest restructuring programme in Northern Ireland has left both staff and unions stunned.

Yann Etienvre, senior vice president of global operations at Sensata Technologies, said the group had been forced to “review our organisational model” because of significant changes among its customer base.

“As a company we are facing a perfect storm of European market conditions which have led to a significant drop in demand for the product lines currently manufactured in Carrickfergus,” he said.

“There has been a well-documented fall in the global automotive industry and this has been further heightened by consolidation in our market, with existing customers being absorbed into large entities whose manufacturing processes use alternative products to our own.”

Sensata Technologies had initially envisaged that it would benefit from a proposed tightening of European legislation governing tire pressure monitoring systems, which in turn would increase demand for its products.

“Unfortunately, this has not happened as indirect sensing solutions continue to be permitted by the European authorities,” Mr Etienvre said.

“The proposed closure of our Carrickfergus site has been a very difficult decision for the company to make, and a number of actions were implemented to try to avoid reaching this point.”

The American group said it would start a “collective consultation period with employees”, adding that alternatives to compulsory redundancy would be considered.

He has also stated Sensata Technologies commitment to its other site in Antrim.

“We continue to manufacture products at our Antrim site and we are on target with our plans to develop a research and development centre of excellence there. This investment in new products and a new technology centre will result in the creation of additional jobs in the next two years,” Mr Etienvre said.