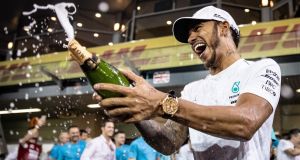 Irish tech developer Actionpoint is gearing up to provide the Abu Dhabi Formula One Grand Prix organiser with a new software system in an agreement it hopes will lead to similar deals in elite motor sport.

Actionpoint, which built the Republic’s online passport renewal system, has agreed to supply software to gulf states motorsport body the Automobile & Touring Club of the United Arab Emirates (ATCUAE) that will automate permits for around 140 events every year.

One is the Abu Dhabi Formula One Grand Prix, won last November by world champion Lewis Hamilton, which is often the last race of the season. Gulf carrier Etihad, which flies from Dublin to Abu Dhabi, sponsors the contest.

ATCUAE is the sole representative of Formula One body Fédération Internationale de l’Automobile (FIA) in the Emirates and oversees motorsports there. Actionpoint is supplying the club with an automated system for managing permit applications for each individual event.

Anyone wishing to organise a motorsport event must get a permit from ATCUAE. Up to now, it has managed the process manually.

Dr Mohammed Bin Sulayem, president of ATCUAE and FIA vice-president, said the fact that Actionpoint provided the Department of Foreign Affairs and Trade with a new passport system, and the company’s track record in the sports industry, were key to the club selecting the Irish company.

“This new system will greatly reduce the amount of admin time spent processing permit requests for all users,” he said. Dr Bin Sulayem added that it was the first regional system of its type in motor sport.

This is Actionpoint’s first Formula One deal. The Irish company hopes it will open the door to agreements with other such bodies.

Actionpoint’s chief technical officer and co-founder, John Savage, said the company already worked with several sports clients, “so the inclusion of motorsports to the mix is very exciting”.

Actionpoint employs more than 100 people in the Republic, US and UK.