The Irish Times Business People of the Month: Patrick and John Collison 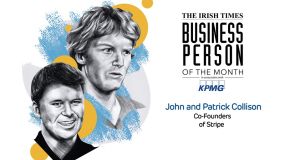 Stripe founders Patrick and John Collison have been chosen as The Irish Times Business People of the Month for January, an award run in association with KPMG.

The Limerick-born brothers started the year with a bang, announcing a $100 million (€88.7 million) follow-on funding round for Stripe and the appointment of a tech titan to the company board.

The latest investment, from Tiger Global, came just four months after Stripe secured $245 million (€216.7 million) in a round led by the same company. The follow-on fundraise saw its valuation leap to $22.5 billion (€19.9 billion).

The online payments company also announced that Diane Greene, who previously co-founded and ran VMware, and who was until recently was chief executive of Google Cloud, was to join what is already a strong board.

The company, which employs more than 1,000 people worldwide and handles billions of dollars in transactions each year, started off with relatively small clients. However, it now counts large companies such as GE, Adidas, Docusign, Slack, Nasdaq, Macy’s and the NFL among its customers.

Chief executive Patrick Collison has stressed on numerous occasions that both he and his brother are in it for the long run. He has also said that the company is still very much at the start of its journey and that with just 5 per cent of global commerce currently taking place online, it sees huge growth opportunities.