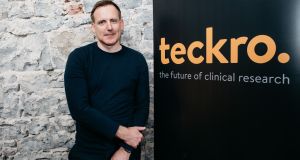 Limerick-based company Teckro has raised $25 million (about €22 million) in a Series C funding round and said it plans to double its workforce to about 200 people in the next 12 to 18 months.

The firm, which uses information retrieval and machine-learning technologies to help make clinical trials simpler and more transparent for doctors, researchers and patients, said it plans to use the funding to develop its products further and grow internationally.

The number of clinical trials on the Teckro platform has increased by 240 per cent in the past 12 months, according to the company. Founded in 2015 by brothers Gary and Nigel Hughes, and Jacek Skrzypiec, Teckro has its eye on rapid growth in the coming months, planning to sign up more clients for its services.

“We’ve got really good adoption in the short space of time,” said Gary Hughes. “For us it’s about trying to make all the information available, in particular the resources required to trial drugs, and digitise it to make it available.”

The company aims to use its platform to get drugs and treatments to market quicker and more efficiently, by making it easier for researchers to carry out the necessary studies and opening up their findings to a wider audience.

Instead of dealing with binders of information and portal sites, Teckro brings all the information together in an easily searchable format.

The firm has signed up 20 of the top 30 pharma firms as clients, and is also targetting biotech firms. But there is still some way to go to transform the system.

“A lot of the offline processes that exist in clinical research . . . they’re still on paper or person to person conversation. The first iteration of Teckro was opening the door. We plan to build on what we’ve established.”

The Hughes brothers have experience in the startup scene, with their first company Firecrest having been acquired by global clinical research firm Icon in 2011.

However, the rate of growth with Teckro has been far quicker, Gary Hughes said. “It took us 10 years to get to the same point,” he said. “Ultimately, Teckro is about ensuring that effective drugs are efficiently and effectively moved from the lab to the patient so that lives be saved.”

Teckro remains an Irish-based company, but it has overseas offices to ensure it can stay close to its customer base.

The company has users in more than 80 countries, and employs more than 100 staff across its global headquarters in Limerick, its engineering hub in Dublin and its US base in Nashville, Tennessee. About 75 people are employed in Ireland, with the remainder overseas. “We expect that number to grow, with the research and developments side doubling over the next 12 to 18 months,” Mr Hughes said. “We want to really drive big investment in research and development.”