Irish make a song and dance at Mobile World Congress

5G, IoT and VR dominate, but return of Nokia 3310 wins hearts if not wallets 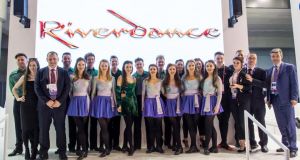 Members of the cast of Riverdance at the Ding stand: “Riverdance is such a global brand and one that denotes everything that is strong and contemporary about Ireland.” 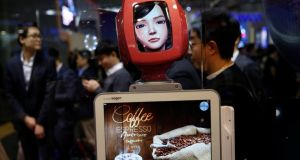 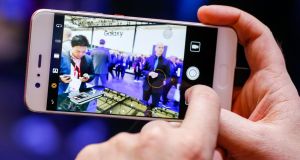 A P10 smartphone, manufactured by Huawei, is used to take a picture of the Samsung Electronics Galaxy Stand on the opening day of the Mobile World Congress. Photographer: Pau Barrena/Bloomberg 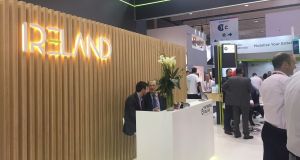 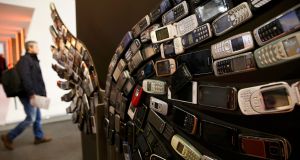 Old mobile phones are made into artwork at the Aptoide stand. Photograph: Reuters/Paul Hanna 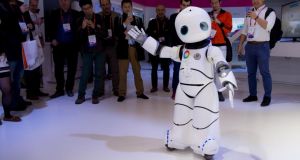 A robot dances on a Chinese mobile company’s stand during the Mobile World Congress in Barcelona. Photograph: Josep Lago/AFP/Getty Images 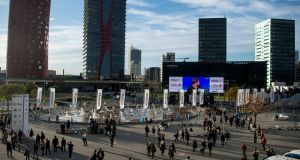 Outside the Mobile World Congress in Barcelona on on Tuesday. Photograph: Josep Lago/AFP/Getty Images

How do you get noticed when you are a small Irish company battling it out with the likes of Sony, LG, Samsung and Huawei at the world’s largest annual global gathering of the mobile industry?

The obvious answer would be to recruit one of the country’s best-known exports. But Bono & co are otherwise engaged, and serving up creamy pints of stout first thing on a Monday morning might cause chaos. So something else was called for.

The solution caused Hall 2 in Barcelona’s Fira Gran Via to reverberate to the sound of uilleann pipes and bodhráns as members of Riverdance rehearsed on a tiny stand ahead of a full performance at the Mobile World Congress.

If nothing else, it was certainly eye-catching. And with some 101,000 visitors from 2,200-plus companies attending this year’s four-day event, anything that helps you stand out from the competition can and will be deployed.

The world’s biggest mobile manufacturers may have fancy new smartphones and cool virtual reality headsets to show off, but nothing beats a bit of pizzazz at the end of the day, said Mark Roden, chief executive of mobile payments firm Ding and the man responsible for bringing Riverdance to Barcelona.

A former EY Entrepreneur of the Year winner, Roden previously teamed up with businessman Denis O’Brien to set up Esat Telecom in the early 1990s. Dublin-based Ding, which he founded in 2006, enables migrants to support family back home by facilitating the instant transfer of credit top-up to any mobile phone anywhere in the world.

“Ding is now over 10 years old and this is the showcase globally for every mobile operator in the world,” Roden told The Irish Times. “We’re connected to over 400 operators in emerging markets, and so this is a fantastic chance to meet all of them and some future customers as well.

“We managed to keep the Riverdance thing under wraps until now and there is a lot of excitement about the fact they are here. It is such a global brand and one that denotes everything that is strong and contemporary about Ireland. So I think it’s a nice association for us.”

Ding is one of more than 30 Irish firms in Barcelona this week. Others include MDS Amiba, Taoglas, VistaTec and Xtremepush. Many made key announcements while there, among them Druid Software, which on Monday announced a collaboration with Rewicom to deploy 4G technology to save lives on Sweden’s roads.

Other Irish mobile tech firms with news to share include internet of things (IoT) firm Asavie Technologies, which announced a new industrial IoT accelerator kit in collaboration with Dell and EpiSensor. In addition, imobMedia announced a data analytics deal with Pinsight. And Anam confirmed it had been selected by Deutsche Telekom to block unauthorised SMS traffic from apps.

A large number of Irish firms were hosted at Enterprise Ireland’s stand, which, truth be told, was somewhat underwhelming, consisting as it did of little more than standalone desks.

HeyStaks, a NovaUCD-based search analytics start-up, which secured a €1.5 million investment from Digicel in 2015, was one of those present on the EI stand. Gearoid Kenny, head of sales, said the company was in for a busy week of schmoozing. “Typically you don’t get big deals at events like this, but it can be the start of a conversation with possible clients that can lead to something down the line.

“It is kind of like speed dating really,” he added. “There are all these mobile operators here and if we were to try and set up meetings with them elsewhere we’d struggle to arrange so many of them. But all the head guys are in Barcelona, and so prior to coming here we were busy setting up as many quick meets in advance as we could.”

The bigger global players have, as you might expect, got the MWC nailed. The likes of Samsung, Huawei, Intel and Google all have big presences in Barcelona and are keen to show off their latest tech.

5G is the word on everybody’s lips, even if the jury is still out on just how interested consumers are in the technology. It was hard to find a stand at this year’s gathering that wasn’t proclaiming how 5G would revolutionise our lives.

Recent figures from research firm Ovum forecast that the technology will begin rolling out globally in 2020, with an expected 24 million 5G subscriptions worldwide by the end of 2021. Only a fraction of these will be in Europe, Ovum predicts.

A second study, released by Mobile World Congress organiser GSMA to coincide with the event, forecast 1.1 billion 5G connections by 2025, equivalent to about one in eight mobile connections globally by this time.

Chinese telecoms giant ZTE unveiled what it claims is the world’s first smartphone compatible with 5G on Sunday, although most analysts were somewhat sceptical.

The internet of things was the other big technology everybody was talking about in Barcelona. IoT is the generic term generally used to describe a world in which everyday items are connected to the internet. Research firm Gartner recently predicted that IoT will shortly hit the mainstream, with some 8.4 billion connected devices in use worldwide by the end of the year.

Not surprisingly, there were plenty of companies, big and small, showing off IoT products and announcing new partnerships to exploit the technology. Virtual reality sets were also evident, with big queues at the Samsung Gear stand, where attendees could try out the latest versions of the headsets.

However, the fuss made over VR appears to be quietening down, with some analysts wondering if the hype around the tech can be turned into concrete sales or whether it will turn out to be the new 3D – something heavily promoted by manufacturers but largely ignored by consumers.

Talking of hype, the fuss over wearable devices such as smartwatches and fitness trackers is being questioned by manufacturers, according to GfK, even as sales enjoyed double-digit growth last year. Still, that didn’t stop many of them pushing out new gizmos.

Of course, the biggest excitement surrounded the launch of new flagship smartphones, including the Huawei P10, the LG G6 and Sony’s Xperia XZ Premium. As Samsung still licks its wounds following the debacle of the Galaxy Note 7, other manufacturers were keen to take advantage of the fact that the Note 8 won’t be out until late March. Samsung did announce two new tablets, including a rival to Apple’s iPad Pro with the Galaxy Tab S3, but eyes were firmly focused elsewhere.

Overshadowing it all was the return of the Nokia 3310. While the Mobile World Congress is usually all about the latest technology, the news that the much-beloved handset has been resurrected by a Finnish start-up was all anybody wanted to hear about.

Sure, there are doubts that anyone will really buy it. But plenty were ready to wallow in a bit of nostalgia at what is usually a forward-looking event.

1 Who are Ireland’s 17 billionaires?
2 Why has the pension age question suddenly become an election issue?
3 Ireland has fifth-largest number of billionaires per capita in the world, says Oxfam
4 Restoring pension age to 65 would cost €620m a year, claims FF
5 Irish rents show second-highest increase in Euro zone
Real news has value SUBSCRIBE