Among those raising funds were MyWallSt and AQ Metrics, which both raised €3m 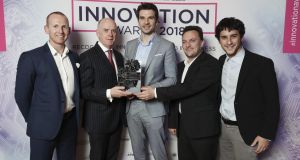 Irish fintech companies raised a combined €36.2 million across 13 deals in 2018, a year in which global investment in financial technology start-ups reached a record high.

Among the Irish fintechs that raised funds were MyWallSt (formerly Rubicoin), and risk and regulatory reporting software start-up AQ Metrics. Both raised €3 million.

“While, relatively speaking, these amounts are small, it is encouraging to see Irish fintechs raise capital to enable them to scale internationally,” said Anna Scally, partner and fintech lead at KPMG in Ireland.

According to the latest KPMG Pulse of Fintech report, the Republic is also continuing to benefit from increased interest from financial services companies looking to establish a European market presence.

Overall, 55 fintech or financial services companies set up shop here in a move that KPMG estimates has led to the creation of more than 4,500 jobs. The report notes that at year-end, the Central Bank of Ireland had worked through about half of the 100-plus application for authorisation it had received.