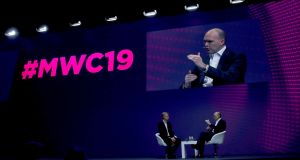 It can be easy to get caught up in the madness of Mobile World Congress (MWC) and its promise of a beautiful tomorrow.

If you want to see what the future looks like, you’ll easily find it on display in the many halls that make up the venue. From artificial intelligence and the internet of things, through to augmented reality and robotics, it’s all here. And with 5G finally set to launch around the world, long-promised technologies suddenly feel more like reality than a distant pipe dream.

MWC Barcelona is the largest annual global gathering of the mobile industry. Not surprisingly, there is little room for negativity here. Nonetheless, even in this shiny happy land, there is room for dissenters.

One of these was an Irish man ready to bring us all back down to earth with a bump. “We are a million miles from what is happening in the real world,” said Mark Roden, founder of Ding, as he surveyed the crowds walking from hall to hall.

“There is a Davos-like feel to Mobile World Congress with chauffeured limos all around, huge money being spent on the event and a big fuss being made over things like 5G that have little relevance to what is happening outside of here,” he said.

Mr Roden is the founder of Ding, an Irish company that enables migrants to support family back home by facilitating the instant transfer of credit top-up to any mobile phone in the world.

“The reality is that amid all the excitement, 5G isn’t going to be relevant for most of the world’s population for a long time,” said Mr Roden. He’s just back from Guatemala, a country where pretty much everyone has pre-paid phones, but in which 80 per cent of people at any one time have no phone credit. This scenario is replicated in many other countries, he says.

The former EY Entrepreneur of the Year award winner, who previously worked with Denis O’Brien in setting up Esat Telecom in the early 1990s, is keen to make it clear that he is no luddite trying to stand in the way of progress.

He claims to be excited about the advent of 5G and the changes it will bring to society.

However, Mr Roden also stresses that half of the world’s population live in emerging markets, and while most of these people have phones, they are basic ones running on antiquated technology.

“In sub-Saharan Africa, most people are using 2G so 5G is an impossible dream for them and will be for a considerable time,” he says.

For Ding, which is readying up plans to fundraise for the first time, this doesn’t mean there aren’t opportunities in the mobile space with the company set to announce some new services shortly.

“If anything I think we should be further ahead than we are when I look at the maths because we have only reached a fraction of the people who need our services,” Mr Roden added.

Mr Roden wasn’t the only one issuing blunt messages about the mobile sector in Barcelona this week.

“Our reputation with consumers is just ahead of the tobacco industry, and in Europe the operators only have themselves to blame for the activities of the regulators given the protectionist approach that has been adopted,” he said.

Mr Read added that he wanted the sector to get out there again and rebuild trust with consumers and businesses.

Trust was a key issue for discussion this week given the ongoing controversy surrounding Huawei. The world’s biggest network equipment company is caught up in a clash between the United States and China over network security for the next generation of mobile services, with President Donald Trump’s administration claiming the company has enabled Chinese state espionage.

Huawei itself used MWC to come out fighting with Guo Ping, one of three deputy chairmen at the company, insisting it does not “do bad things” when he appeared onstage at the event.

“Let me say this as clear as possible: Huawei has not and will never plant backdoors. And we will never allow anyone to do so in our equipment. We take this responsibility very seriously,” he said. “The US security accusation on our 5G has no evidence – nothing.”

The GSMA, which runs MWC Barcelona, also used the congress to push back against the US call on European countries to bar Huawei. Elsewhere, digital single market commissioner Mariya Gabriel called for a swift resolution to the issue.

Ding wasn’t alone in flying the Irish flag in Barcelona this week. Irish tech companies were out in force with 22 Enterprise Ireland (EI) clients showcasing at the event. More than half of these were at EI’s dedicated stand, which was revamped this year with colourful blue livery.

“EI has pulled out all the stops with this beautiful new stand. The signage is visible from miles away so they have done great in pushing the country brand out there, which has made it easier for us to get our customers here,” says Eddie Kilbane, co-founder of Zyalin Group.

The company’s iKydz product suite gives parents control of what their children are doing online, whether they are on wifi at home or out and about using a mobile network.

“Pretty much all the customers we’re talking to globally are here at MWC so it is easy to get meetings and it serves as a great launchpad for our new products. We’re also signing a number of big new contracts during the week,” Mr Kilbane adds.

Inhance Technologies, a Cork-based mobile tech company, was also on the EI stand. “We love coming to Mobile World Congress. I go to events across the world but this really is where it is at in terms of mobile technology. For us it is invaluable,” says director John Burke.

“Most of our work is done prior to arriving so I’d say we have 40 to 50 meetings lined up. We like to hit the road running so there isn’t much partying, although we might fit a pint in here and there.”

The companies have teamed up to provide dedicated 4G LTE (long-term evolution) coverage for drones as well as body-worn cameras, vital sign and mobile devices technology at incident sites.

“The congress is always a great opportunity for us to meet with customers and if we didn’t have a presence here, there would be serious questions raised,” says Druid Software chief executive Liam Kenny.

“Being on the Enterprise Ireland stand, in particular, really is important. If we were to take our own stand we’d likely be out the back somewhere facing a wall and with no one dropping by. The EI booth is a big draw and means we are in the thick of it all.”

There was also a research project from Cork Institute of Technology and Dell EMC Cork being promoted onstage. It centres on how technologies such as 5G can be used to dramatically advance the delivery of emergency healthcare services.

Smartphone launches may only be a fraction of MWC but they account for the lion’s share of media attention. Samsung sought to shake things up this year by holding its big reveal event ahead of time in San Francisco.

It secured plenty of coverage for its new foldable device but it was easily eclipsed by the unveiling of Huawei’s Mate X. The MWC verdict was that Huawei’s foldable smartphone was a superior product, even with a price tag of €2,299.

Not all mobile manufacturers are sold on foldable phones. Sony went tall with its news flagship Xperia 1, while HMD stacked up on multiple cameras for its Nokia 9 PureView. And Apple co-founder Steve Wozniak this week lamented the fact that the American tech giant was behind the game on foldable phones.

If MWC showed nothing else it is that after something of a lull, mobile manufacturers are back to producing exciting devices. Whether consumers are prepared to pay the eye-watering sums required for game-changing phones, remains to be seen.