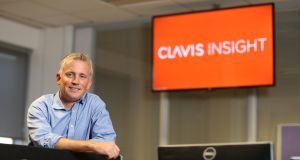 Clavis Insight, an Irish provider of ecommerce store analytics to many of the world’s largest consumer goods companies, has been acquired by London-listed firm Ascential for an initial cash consideration of $119 million (€100 million).

However, under the terms of the deal, the price paid for Clavis could rise considerably if the company achieves strong revenues in the coming years.

Founded in Dublin in 2008 by Garry Moroney, Clavis Insight employs about 170 people, including 100 in Dublin.

The company has developed proprietary technology that enables firms in the consumer goods space to automatically perform an online in-store audit of its products.

The company’s customers include many of the world’s largest consumer product companies, including Unilever, Procter & Gamble, Nestlé, Mondelez and and L’Oreal.

Clavis has previously raised more than $35 million with backers including Accel-KKR, Dublin and London-based Draper Esprit. Other investors in the company include Delta Partners and Enterprise Ireland.

The company, which took part in an £800 million flotation on the London Stock Exchange last year, also publishes a number of magazines including Retail Week and Nursing Times.

Ascential has agreed to acquire Clavis for an initial cash consideration of $119 million. It said rain out consideration is based on the annualized recurring revenue of the business at the end of each of the next three years to 2020and is expected to total between approximately $25million and $50 million.A portion of the earn out is subject to founders remaining in employment with the company.

The total potential consideration, including initial consideration and earn out payments, is capped at $219 million “in the event that extremely stretching annualised recurring revenue levels are reached.”

Once the deal is completed, Clavis is to become part of Ascential’s Information Services division will be integrated with the group’s OCR’s Amazon sales and share solution to produce a combined product suite

The company generated $13 million in revenue last year an an ebitda loss of $7 million with gross assets of $19 million at the end of 2016. Sales are expected to reach $17 million in the current financial year with the firm expected to breakeven in 2018.

Ascential said Clavis benefits from a high level of recurring revenue with 95 per centof total revenue being subscription based.

The acquisition is being funded from cash reserves and existing borrowing facilities and is expected to be enhancing to Ascential’s earnings per share in the second full year of ownership.

“As a high growth business that offers synergies with our existing brands,

“Through combination with OCR’s offering, we will provide ever more comprehensive, accurate and actionable analytics and insight,” he added.