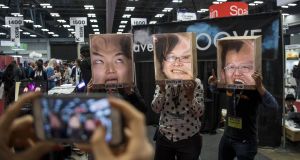 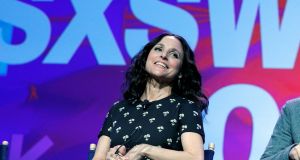 Actor Julia Louis-Dreyfus joins the cast and showrunner of the television series Veep for a discussion at the SXSW Music Film Interactive festival. Photograph: Brian Snyder/Reuters 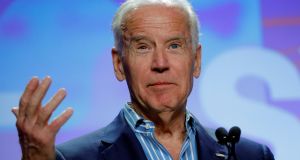 Former US vice-president Joe Biden speaks about the Biden Cancer Initiative at the at the Music Film Interactive Festival. Photograph: Brian Snyder/Reuters 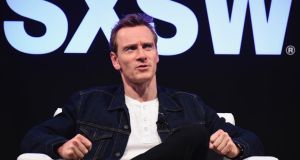 Actor Michael Fassbender takes part in the Made in Austin: A Look Into “Song To Song” panel discussion during the festival . Photograph: Michael Loccisano/Getty Images for SXSW

Ireland’s trade delegation may have spent more time than they’d have liked allaying fears over Brexit at SXSW Festival 2017 in Austin, Texas over the past few days, but some of the start-ups showcasing were among the best Ireland has had on offer in recent years.

It’s no easy task standing out at the annual SXSW Conference, a 10-day event at which music, art, tech and enterprise all compete for attention . Last year, Galway’s street-performance artists, Macnas, guaranteed Ireland made a splash by staging a spectacle in downtown Austin on “dirty” 6th St (think Temple Bar except with bourbon and BBQ) in the way only they know how.

While the Irish entourage of artists, musicians and Enterprise Ireland-backed start-ups is no smaller than in previous years, one got the sense budgets may have been re-examined this year.

This is in stark contrast to the UK. The Brits have always sent one of the largest international trade delegations to the event, but this year they are there with more pomp than usual, presumably in an attempt to convince the thousands of pundits in attendance that the UK is still open for business post-Brexit.

We Need to Talk About Brexit

Minister of State for Employment and Small Business Pat Breen had to answer his fair share of Brexit-related queries on his trip to the Texan capital on his four-day visit to the Lone Star State as part of the government’s annual St Patrick’s Week powwow with America. “Brexit came up a lot during the Minister’s trip,” explains Adrian Farrell, Ireland’s Consul General for Texas and the Southwest. Almost everyone asked about it, from Texas Governor Greg Abbott, to Austin’s mayor, Bill Adler.

“People were inquisitive rather than concerned about Ireland’s outlook post-Brexit,” adds Farrell. “Our perspective is that Ireland would profit from the new political and economic reality in the UK.”

They must have been pretty convincing as Bill Adler confirmed he would lead a trade group to Ireland in July. It is expected up to 20 local companies will accompany him in an effort to establish new international commercial links. It was also announced last Monday that new Fulbright - Creative Ireland Museum Fellowships would be funded for Irish students at the Harry Ransom Centre, an extensive archive, library and museum at the University of Texas at Austin.

Enterprise Ireland brought some impressive new Irish start-ups to sell their wares including Sanctifly, a club allowing business travellers access to airport hotels’ gym, pool and spa facilities before, after or in between flights. Sanctifly is already set up for 50 locations in the US and Britain and is showing signs it will expand globally before too long.

Systemlink Technologies have developed a more efficient rival to home control centres, such as Nest. AquaEko is a novel and intelligent internet-enabled, instantaneous storage system for hot water & heating that is retrofittable to any existing water storage tank already on the market.

Parkpnp described itself as the new Air BnB for parking. This novel digital marketplace allows users to list, advertise and generate revenue from their unused and underutilised car parking spaces, be they outside residential homes, or in shopping centre parking lots.

The biggest success for Ireland, however, was when Cork-based DNA data storage start-up HelixWorks, was named “most innovative company” at the SXSW Accelerator Pitch event. It’s an accolade made particularly sweet by the fact that they were Ireland’s only entry into the completion.

Several Irish artists have made it big at the Austin festival which has grown considerably over the years. Concurrently, a degree of cynicism has grown among musicians as to how legitimate a showcasing event it really is anymore.

“With past line-ups including Villagers, Lisa Hannigan, James Vincent McMorrow, Hozier and Kodaline, Music from Ireland’s official SXSW showcase is always a highlight for us and the international delegates who come to SXSW to do business,” said SXSW music programmer Casper Mills.

Ultimately the Irish entourage, Brexit, and everything else going on in Austin over the nine-day event will be overshadowed by the new, overtly political direction in which programmers are headed.

SXSW has always been a forum for politics, but the two-day ‘Tech Under Trump’ programme is perhaps the most explicit festival curators have ever been in terms of providing a podium for debate.

Not that there’ll be much by way of proposition and opposition. This is a festival set in a liberal town attended by mostly liberal pundits. Last year, former President Obama was the keynote speaker. This year former vice president Joe Biden joined the party. Austin’s answer to Hot Press magazine, the Austin Chronicle, ran a piece previewing events scheduled for ‘Tech Under Trump’ with the title: ‘So How F**ked Are We, Exactly?’

Whatever happened to “when they go low, we go high”?