Ganley gets political big guns to help snag slice of $6.5bn US project 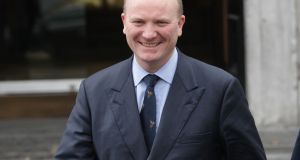 Declan Ganley’s Rivada Networks has deployed two US political heavyweights, former state governors Jeb Bush and Martin O’Malley, as part of its campaign to salvage a slice of a $6.5 billion US government project to build a dedicated telecommunications network for emergency services.

Former Florida governor and one-time Republican presidential hopeful, Mr Bush, and Democrat and former Maryland governor, Mr O’Malley, have jointly written to a US House of Representatives committee in relation to the FirstNet project. Both men were last year appointed as directors of Mr Ganley’s company.

Rivada has unleashed a fierce lobbying campaign in recent months over FirstNet, after losing out on the federal contract for all of the US to rival, AT&T.

Individual states have until December 28th to opt out of the federal FirstNet system. Despite losing the overall contract, Mr Ganley has been positioning Rivada to pick off individual states by convincing state governors to opt out.

More than 30 states have so far indicated they will opt in, likely taking them out of Rivada’s reach. However, the company believes it still has a shot at several other major states, especially in New England regions.

Among the 13 states that have so far issued requests for proposals from other operators – without saying if they will opt in or out of FirstNet – are North Carolina, Colorado, Connecticut, Georgia, Massachusetts and Mississippi.

Some heavily populated states, such as California, New York, Florida and Illinois, have not said if they will opt in but also haven’t yet tapped up alternatives. New Hampshire has already plumped for Rivada should it decide to opt out, although it has not yet formally rejected FirstNet.

Rivada is expected to intensify its efforts to convince individual governors to opt out ahead of the December deadline, and Mr Ganley has recently made presentations to several legislatures. Presenting in Pennsylvania, he promised to create 6,000 jobs. He told the assembly there that if it went with his company, it would have greater control than if it opted in to the AT&T built FirstNet.

“[If something went wrong] you’d have a throat to choke. . . this is it right here,” said Mr Ganley at a hearing, pointing to his own neck.

On Monday, Mr Bush and Mr O’Malley signed a letter to the US House committee on energy and commerce, a subcommittee of which held hearings regarding the progress of FirstNet last week.

The two former politicians told the committee that Rivada’s executives had the “operational and planning experience” to build out communications telco networks for emergency services.

Such dedicated networks were originally proposed by the commission into the 9/11 atrocity.

Meanwhile, Rivada this week hired a high profile tech lawyer, Joe Titlebaum, as its general counsel, which Mr Ganley said would help it as the FirstNet deadline looms.