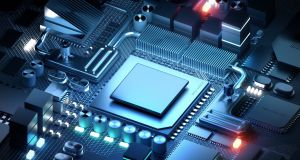 TSMC, the main chipmaker to Apple and Huawei, has picked a site for the future plant and both federal and state governments have agreed to help make up for the higher cost of fabricating semiconductors in the US, chairman Mark Liu told reporters Tuesday. Negotiations continue over the specifics of those incentives, he said without elaborating or identifying the site’s location.

The decision to situate a plant in Arizona came after White House officials warned about the threat inherent in having much of the world’s electronics made outside of the US. TSMC had negotiated a deal with the administration to create American jobs and produce sensitive components domestically for national security reasons. It announced the project just before Washington leveled new restrictions on the sale of chips to Huawei, seeking to contain one of TSMC’s largest customers.

TSMC has set aside land adjacent to its selected plot and hopes to convince its own suppliers to set up operations in the vicinity over time, Mr Liu added. They would join the likes of Intel and Micron Technologies, which already operate facilities in the western state and have helped build a vibrant local semiconductor industry over the years. The scope of any eventual subsidies would require blessing from Congress, Mr Liu added.

“Subsidies will be a key factor in TSMC’s decision to set up a fab in the US,” he said. “We are still talking to the US government. Our request is that the state and federal governments together make up for the cost gap between the US and Taiwan.”

TSMC is embarking on its US endeavor during one of the most turbulent years in memory, with the coronavirus pandemic depressing the global economy and smartphone demand that top clients Apple and Huawei depend on for growth. The company, which in April trimmed its 2020 sales outlook, also finds itself in the crossfire as the Trump administration ratchets up a campaign to contain China. Washington last month barred any chipmaker using American equipment from supplying the networking giant without US approval, effectively blocking Huawei’s access to semiconductor manufacturing and dealing a blow to TSMC’s business.

The Taiwanese chipmaker hopes to keep supplying Huawei but is confident other customers can replace any business lost because of tightening US curbs on China’s largest tech company. TSMC is studying the latest restrictions and is hopeful the issue will get resolved over time, Mr Liu told shareholders Tuesday. Mr Liu declined to comment when asked whether TSMC had already ceased taking orders from the Chinese company.

But Mr Liu reaffirmed TSMC’s projections for 2020, saying it still planned to spend as much as $16 billion this year on capacity upgrades and technology, and foresees a mid- to high-teens percentage rise in 2020 revenue.

Shareholders “can rest assured that we will resolve these new restrictions one by one. We will find a solution to continue to grow and secure more profits for our shareholders”, Mr Liu said at Tuesday’s annual general meeting. “If there are no more HiSilicon orders, our other customers will want to fill the gap in our capacity, market share, or smartphone market share left by Huawei. How fast they can fill that gap depends.”

Washington’s curbs – a more precise strike against Huawei because it targets its secretive and cutting-edge HiSilicon semiconductor division – threaten to wreak havoc throughout the complex chip ecosystem that produces technology for consumers and companies globally.

As the world’s largest and most advanced maker of chips for other companies, TSMC plays a crucial role in the production of devices from smartphones and laptops to servers running the internet. Huawei is TSMC’s largest customer after Apple and accounts for about 14 per cent of the Taiwanese chipmaker’s sales, according to data compiled by Bloomberg. The Taiwanese firm may now have to cut off Huawei unless it gets waivers from the Commerce Department. But additional business from existing clients like Apple, Qualcomm, MediaTek or Advanced Micro Devices could help offset a decline in orders.

For TSMC, it’s growing ever more difficult to remain neutral amid the growing tensions between the US and China. The company brands itself “everybody’s foundry,” effectively the Switzerland of the tech industry something executives reiterated on Tuesday. It supplies not just Chinese customers like Huawei but also the American military, while relying on US producers of semiconductor-making equipment like Applied Materials and Lam Research Corp.

“New restrictions can lead to a rebalancing among market players,” Mr Liu told reporters. Huawei “will not be able to make smartphones in the future without semiconductors, and other smartphone brands will eat into its market share”.

“We will still have a high market share after the rebalancing,” he added. – Bloomberg

1 Irish company to test vaccines on volunteers deliberately infected with Covid-19
2 Air travel never going ‘back to way it was’
3 Eir takes on extra staff as ComReg chases it on complaints
4 Should I switch bank now with Ulster Bank at risk of closing?
5 Bank of Ireland sees more than 1,400 staff apply for redundancy
Real news has value SUBSCRIBE