Give your outdoor cooking the benefit of technology

Tech Review: Make your grilling smart with the Weber Connect 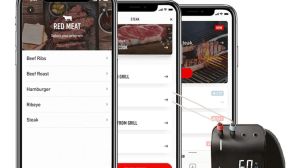 Weber Connect Smart Grilling Hub
€130
Summer in Ireland can usually be pinpointed to a week or two if we are lucky, usually coinciding with the start of normal exams. We all have memories of sitting in stuffy halls while the sun beat down outside, only for the clouds to roll in about five minutes after we finished our last exam.

Yes, we know what the calendar says when it comes to summer (though the argument about whether August is summer or autumn is a fierce one online) but no one expects the Irish weather to pay attention. Still, we are optimistic, buying our garden furniture and chimineas from Lidl or queuing for ages to buy a €20 giant paddling pool from Aldi.

And then there is the other great hope: the barbecue.

How are your barbecuing skills? Mine are, shall we say, underused in the past few years – okay, so about 15 years, if we’re being honest. It’s a combination of not wanting the hassle of cleaning up the grill, fear of undercooking the food and poisoning everyone, and the realities of the Irish climate that means it will probably be used for three days a year.

But this year, I got sucked in. With the sun looking to hang around for a few days, and having nowhere else to go, I bought a barbecue. It stayed in the box for a week, because it turns out they aren’t sent fully assembled.

The Weber Connect Smart Grill arrived the same week, but was thankfully a lot easier to assemble. The device promises to turn any barbecue into a smart grill, one that will do almost anything except flip the food for you.

The device has a simple premise: it talks you through the process of cooking your meat to perfection. You have the hub itself, the probe that goes into the meat, one ambient temperature probe that keeps an eye on the barbecue heat and the app that will guide you through the steps. You connect the hub to your phone or tablet over bluetooth, and you are ready to go.

Well, almost. Setting it up requires a bit of time initially. Although there aren’t many steps to it, it requires a software update out of the box. That took a couple of attempts to get through, thanks to slightly temperamental wifi. You’ll also need to charge it up, which can take a couple of hours.

The app has a choice of red meat, pork, lamb, poultry or fish. That covers everything from steak or burgers, lamb chops or leg of lamb to pork shoulder, loin or chops, or chicken breast, whole chicken or whole turkey.

You choose the meat, its cut and how you like it cooked; you place the probe and the app will do the rest. If the included options don’t cover what you want, you can also set a temperature and the probe will alert you when you reach it. That is handy, because if it’s not one of the meats listed, there are no on-screen steps to follow.

How you place the probe will make a big difference to the end result. You have to place it sideways into the meat, otherwise it will pick up the heat of the barbecue and you’ll end up with underdone meat.

Once you have the probe placed, you follow the prompts on screen; the app will count you down to how long you have left before you have to flip the burgers, or buzz to notify you that it’s time your medium rare steak was removed from the barbecue. It’s remarkably simple.

The first attempt at using it – burgers – turned out well, but I learned one important lesson that no amount of smart grilling hubs could teach me: that barbecuing depends on the coals. So, while my burger with the probe in it was cooked to perfection, the others were still underdone. Lesson learned: it’s all about placement.

The steak went a little better, and had I noticed the phone prompt, I would have had perfectly medium steak instead of medium to well done. Lesson two: keep an eye on your phone.

If you are a complete novice at barbecuing, the Weber Connect Smart Grilling Hub will guide you through it with baby steps. And although it’s intended for the barbecue, you could possibly use it to keep an eye on the temperature of the food in your oven.

If you are an experienced griller, there is probably very little the hub can teach you. It would just be a rather expensive paperweight.

It’s also a bit limited in terms of non-meat items – they do appear on a barbecue from time to time, but there is nothing on the app to cater for them – but that’s just a simple update.

The hub comes with one meat probe and one ambient probe, but it has space to connect four. Additional probes cost €20 from Weber.

If you are a novice (like me) or a perfectionist when it comes to barbecuing, the Weber Connect Smart Grilling Hub will give your outdoor cooking an edge. It just needs a little more in the way of food options.