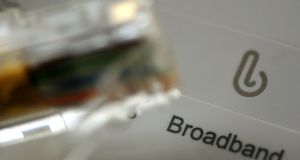 BT is expected to pay out £300 million in compensation to rivals over delayed high-speed cable installations. Photograph: Rui Vieira/PA Wire

BT has been given a £42 million (€49 million) fine by the UK telecoms watchdog and is expected to pay out £300 million (€347 million) in compensation to rivals over delayed high-speed cable installations.

Ofcom said BT Openreach committed a “serious breach” of its rules for reducing payments to other providers between January 2013 and December 2014. The telecom giant was supposed to pay out compensation after failing to deliver Ethernet high-speed services to rival telecom companies in adequate time.

It said it “apologised wholeheartedly” over the incident. Ofcom has rules to curb the company’s “significant market power” to ensure competitiveness, as other providers rely on access to its vast network.

Gaucho Rasmussen, Ofcom’s investigations director, said: “These high-speed lines are a vital part of this country’s digital backbone. Millions of people rely on BT’s network for the phone and broadband services they use every day.

“We found BT broke our rules by failing to pay other telecoms companies proper compensation when these services were not provided on time.

“The size of our fine reflects how important these rules are to protect competition and, ultimately, consumers and businesses. “Our message is clear – we will not tolerate this sort of behaviour.”

Compensation will now have to be paid to affected providers – including Vodafone – within 12 months, Ofcom said.

BT had faced an even greater fine, but this was slashed by 30 per cent after it admitted full liability. It was fined a further £300,000 for “failing to provide information” to Ofcom.

The investigation found BT “misused” a contract to slash its payments to providers over the delayed installation. Ofcom said it was required to install the high-speed lines to wholesale customers such as Vodafone and TalkTalk within 30 days or pay compensation.

Ethernet lines are often used by large businesses and broadband providers to ensure fast services and was said by the regulator to “underpin the UK’s communications infrastructure”.

BT said it estimated the total cost of the compensation payments would be about £300 million.

Openreach CEO Clive Selley said: “We apologise wholeheartedly for the mistakes Openreach made in the past when processing orders for a number of high-speed business connections. This shouldn’t have happened and we fully accept Ofcom’s findings.”

Pat Phelan’s Sisu chain raises additional funds as it eyes US launch 17:33
Siemens’ $18bn energy spin-off falls in Frankfurt debut 17:30
Stripe takes part in major fundraising rounds for Stedi, PayMongo 17:26
Am I paying too much for my buy to let mortgage? 17:43
Mortgage breaks will not be extended beyond this week 16:28

1 Former junior minister Michael D’Arcy did not contact ethics watchdog over new job
2 Three Ireland switches on 5G network around the country
3 Mortgage breaks will not be extended beyond this week
4 Pilita Clark: The looming legal minefield of working from home
5 Chris Johns: Boohoo exposed on pay and conditions in digital economy
Real news has value SUBSCRIBE