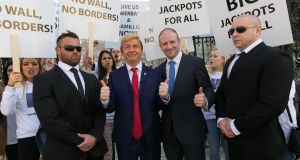 Oliver Callan as Donald Trump at the launch in Dublin of Lottoland: the Gibraltar-based firm generated €300m in revenue last year

Whatever you might think, playing the lottery is a fixed-odds bet, akin to putting money on a horse. The only difference is the likelihood of winning: in other words, the length of the odds.

A Grand National horse might be a 20 to 1 chance; picking the right numbers in the National Lottery here is 11 million to one; hitting the EuroMillions jackpot is 139 million to one.

It is these improbable odds that allow Lottoland, the newest gaming industry disruptor, to circumvent the traditional mass-ticket draws while essentially offering consumers the same product.

The website, which was launched here two weeks ago, gives punters a chance to play the biggest lotteries in the world, including the US PowerBall draw, which last year paid out a record $1.5 billion (€1.39 billion) jackpot, the biggest in lottery history, without actually buying a ticket.

If a player picks the right numbers, the company pays out the equivalent prize money. It manages to do this through a complex formula of hedging and insurance, which involves a sizable capital buffer, a €100 million insurance-linked security and various other insurance policies.

The company has been described as an Uber-style assault on the traditional lotto industry. To date, its biggest payout has been €22 million to a player in Germany who correctly selected the winning combination to a German draw last year.

In the three years since it began, the Gibraltar-based firm has built up a player base of 5.5 million and last year generated €300 million in revenue.

The concept is the brainchild of gaming industry veteran Nigel Birrell, a former director of poker and sports betting firm BwinParty.

It capitalises on the appetite for bigger and bigger jackpots, which accelerate ticket sales. When the US PowerBall jackpot soared to $1.5 billion last year, the company signed up an additional 250,000 players in Australia in just 48 hours.

The recent changes to the Lotto here – the hike in price and the additional numbers – were also designed to generate bigger jackpots and entice more customers into the fray.

To operate in Ireland, Lottoland secured a remote gaming licence from the Revenue Commissioners. It sells a one-line play for the Irish Lotto for €2, compared with the National Lottery’s minimum price of €4, albeit the latter is for a two-line play.

However, Lottoland undercuts the incumbent by offering one-line plays on the weekly EuroMillions draw for €2 compared to the National Lottery’s price of €2.50. This is viewed as a big opportunity to steal market share.

In Britain, it’s already at loggerheads with operator Camelot over its EuroMillions pricing structure.

On the likelihood of having to pay out one of those monster sums from the US, Mr Ross said the hedging arrangements were complex but that “the company doesn’t put itself in the position where it can’t pay out”.

He said the model even allowed players to double their stake and to double the potential jackpot. He would not reveal what sort of sales the company has generated in Ireland so far other than to say it had received a good response to its marketing campaign.

Mainstream lotteries claim companies such as Lottoland erode their ability to generate funds for good causes. In response, Mr Ross said the company was planning to repatriate some of its Irish earnings through a local charity.

Either way, traditional lotteries are calling for more rigorous regulations, the classic establishment response to a disruptor.