Pay increases likely at one in three businesses, survey shows 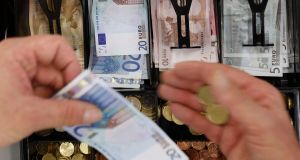 A third of businesses are planning to increase pay over the next 12 months while about 40 per cent of workers expect a boost in their wages over the same period, a report published on Monday shows.

The Bank of Ireland Economic Pulse survey, which measures consumer and business confidence, indicates that householders’ and employers’ views of their finances are at their most upbeat in a year.

According to Dr Loretta O’Sullivan, the bank’s chief economist, business sentiment improved in June and is stronger than it was a year ago, in the wake of the UK’s vote to leave the EU.

“On the wage front, one in three firms are planning on increasing basic pay in the next 12 months, while two in five workers are expecting a pay rise,” she said.

“While Brexit is a worry for many firms and the related uncertainty has taken a toll on sentiment, two in three businesses still have ambitions to expand over the next one to three years,” Dr O’Sullivan added.

Builders and services are the most bullish about the year ahead while shopkeepers are more subdued, the survey shows.

Improved job prospects and incomes mean that consumers are more willing to spend than they were a year ago.

Dr O’Sullivan noted that consumer confidence has been climbing over the past few months and is now at its highest since the UK voted to leave the EU last June.

“Ongoing employment and income gains contributed to this, with the July survey indicating that 40 per cent consider it is easy to find or change jobs, up from 30 per cent a year ago,” she said.

She explained that households were getting to grips with the dual shock of Brexit and Donald Trump’s victory in the US presidential race.

The likely impact of both prompted more than two in five Irish households to put spending plans on hold because they were unsure of what way economic policy was going to go.

“However, with gross domestic product and the labour market putting in a better-than-expected performance in the opening months of this year, the initial shock looks to be wearing off, with the number holding out on spending down to one in three in this month’s survey,” the economist said.

The number of people who believe that house prices will increase by more than 5 per cent over the next year was up, with 57per cent of them saying that this is a good time to sell.

The survey is based on answers from 1,000 homes and more than 2,000 companies to questions on the economy, their financial situation, spending plans house prices and business activity.