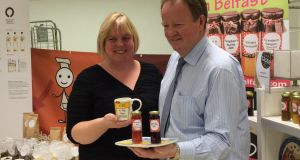 Suzanne and Keith Livingstone are the husband-and-wife team behind Baked in Belfast, a business best known for jam and marmalade in flavours including gin and tonic, as well as their home-made ceramics.

Having scooped Great Taste and World Marmalade Awards since being established in 2011, Baked in Belfast now supplies Hastings Hotels and Tayto as well as stockists around Ireland, all from a converted outbuilding at home in Enniskillen.

It has to be the unusual flavours of our jams and marmalades. Everything we do, we make ourselves and that’s probably what also sets us apart.

We had a mentor called Paddy Devlin on a programme called Survive and Thrive who used to be one of the heads of buying in Guinness. He was also one of the people who formed Genesis bakery in Northern Ireland.

We weren’t getting many orders from shops and he looked at the list of what we were offering and told us we were offering too much. He told us to offer a core list and that’s when we went from supplying four or five shops to about 40 shops in about six months.

What is the biggest mistake you have made in business?

We had the opportunity to grow by going down the route of factory production. We didn’t think that fitted with the ethos of the company which is handmade and hand-painted. Our decision has caused a few problems when there is only the two of us here but we’ve got over them because we can’t afford to make mistakes.

When we started making our gin and tonic marmalade, Suzanne tweeted Theo Paphitis of Dragons’ Den for his Sunday Small Business prize on Twitter. We were the first people from Northern Ireland to win.

She went over to meet him and, when she came back, we came up the ideas for pina colada marmalade, strawberry daiquiri jam, raspberry vodka jam, and vodka and orange. Theo Paphitis tweeted about us to his half a million followers and that got a few shops interested and we started to supply a few local stockists around Belfast and it basically grew from there.

We started doing craft fairs and markets, Victoria Square in Belfast being our biggest. The business has grown every year by about 15 or 20 per cent.

Whom do you most admire in business and why?

The names that spring to mind are mostly self-starters like Lord Sugar for his grit and determination to get where he wanted to go. Jacqueline Gold and Nicholas Mosse the potter also spring to mind.

Based on your experience in the downturn, are the banks in Northern Ireland open for business to SMEs?

At the height of the financial crisis, we looked at a unit in Belfast which we thought we would convert to a food production area. It would cost about £10,000, half of which we had already. When we went to our local business manager in the bank, we were told by the girl at the counter that we were firing up a blind alley because they weren’t lending. We heard similar stories from other people going to other banks.

What one piece of advice would you give the Government to help stimulate the economy?

Our experience recently is that Invest NI is now too concerned with the bottom line and big business instead of helping very small businesses and watching them grow. We were once clients of Invest NI, but now small businesses have to have a turnover four times the amount we had when we were asking for their help.

Invest NI wants to say that it is providing 100 jobs at £20,000 a year. It could put the same money into small businesses that employ two people. The salaries might not be £20,000 a year, but the benefit to the economy would be greater.

What has been the biggest challenge you have had to face?

In August, we got a large order from Hastings Hotels for their corporate customer. We didn’t have much time to come up with the first half of the order and didn’t even know if our supplier had the required 4,000 of our jars in stock. Thankfully it all came together and since then we’ve had two further corporate orders. One is for Tayto , so that is prestigious to say we’re supplying Tayto.

The only thing we can predict in this business is its unpredictability. The two words we have found ourselves using more than any others in this business are “what if”. We always have back-up plans.

What is your business worth and would you sell it?

It’s hard to value the business as it’s such a personal thing. We would estimate it at circa €250,000 and we don’t think we would sell.

1 Consumer mood darkens, businesses react to Level 5 and Diageo launches Guinness 0.0
2 Guinness brings out a non-alcoholic version of the black stuff
3 How long can Government afford to keep State pension age at 66?
4 John FitzGerald: North needs reform more than unity
5 Sherry FitzGerald aims for bigger share of broker market
6 Paul Coulson plans record $1.8bn Ardagh investment
7 Open for business: How industry has adapted to survive the lockdown
8 Donohoe said delay to local property tax reform was ‘untenable’ before deferring it
9 How much will a Covid-19 vaccine cost?
10 If lockdown has morphed from tactic to strategy, the State has failed
Real news has value SUBSCRIBE