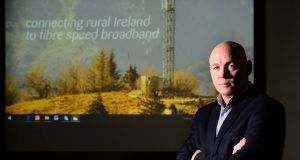 Canadian investment giant Brookfield Asset Management is taking a major stake in Irish entrepreneur Sean Bolger’s Imagine Communications wireless broadband group, in a deal which values it at close to €200 million, it is understood.

The investment will result in an injection of close to €100 million into Imagine, which will be used to help the group roll out its LTE (Long Term Evolution) wireless technology to other European markets.

Mr Bolger was unavailable for comment last night but the deal, which AIB Corporate Finance advised on, was made public in a merger notice issued by the Competition and Consumer Protection Commission (CCPC).

It revealed that “sole control” of Imagine is proposed to be bought by a newly-established UK entity, BCP IV Telecommunications.

It is understood that BCP is proposing to take a majority stake in Imagine of just over 50 per cent of the group. BCP is thought to involve a partnership between Brookfield and existing investors in Imagine, including Mr Bolger and his business partner Brian O’Donoghue.

Records for BCP in the Companies House in the UK suggest that Toronto-based Brookfield, one of the world’s largest infrastructure funds with global assets under management of more than $250 billion, will have voting control of this entity of between 75 and 100 per cent.

Brookfield’s past investments in Ireland include the wind assets of Bord Gais, which it bought in 2014 as part of the privatisation of the company.

The existing Imagine investors’ involvement in BCP, together with their retained minority stake in the Irish group, suggests that Mr Bolger and Mr O’Donoghue will remain centrally involved in the running of the business.

Imagine’s other investors have included NTR and Kilsaran Concrete, as well as a group of French shareholders.

It is envisaged that Imagine will embark upon a significant period of investment, both in Ireland and overseas. It has already rolled out its fixed wireless services across much of Ireland.

Imagine did not qualify for the long-delayed National Broadband Plan, which aims to use high-speed fibre to deliver broadband to rural parts of the State. There remains the possibility, however, that the eventual NBP rollout may need to deploy an element of fixed-wireless technology to meet its targets.