Potential US investors will remember this for some time to come 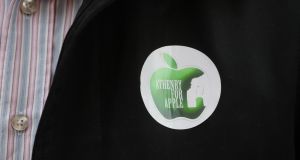 Getting a big-name company such as Apple outside Dublin and Cork would have put a shiny gloss on Government strategy.Photograph: Collins Courts

Apple’s decision to back out of plans to build a data centre in Athenry, Co Galway, really comes as no great surprise. Its wishy-washy, noncommittal response after it finally won planning approval ages ago was signal enough then that it had swiped left on that particular relationship, and likely would be hard to woo back.

But for the Government and its development agencies, the final rejection – after a three-year, thumb-twiddling wait – will be a significant worry. It just doesn’t look good for your national, big-picture foreign direct investment strategy. All those St Patrick’s Day visits to US business leaders by members of Government, those glossy agency brochures and enticing invest-here websites mean little if, at the end of the day, a clumsy, slow planning appeals process banjaxes everything.

In particular, it messes up a critical and badly needed plank of investment strategy: bringing needed growth and high-tech business development into the regions.

Dublin is always going to be appealing to companies and employees for a whole swathe of business, financial and employee hire and retention reasons. But Dublin is becoming increasingly problematic with its costs, congestion, and housing issues. And it already is jam-packed with companies as well as electricity-needy data centres of the sort Apple was proposing for Athenry.

Getting a big-name company such as Apple outside Dublin and Cork and into an underdeveloped, big growth-potential area such as Athenry – especially with a state-of-the-art green energy facility – would have put a shiny gloss on national strategy and created an exemplar regional development project. This would have been a significant plus for attracting other companies into this and other regions, even if a data centre alone promised far more short-term construction jobs than actual facility jobs.

As with Cork, where Apple goes, others tend to follow. It is a huge loss.

Of course, citizens must have the right to challenge planning decisions. But this particular, messy effort highlighted the State’s problems with slow, parochial planning processes that have long been unfit for purpose.

US companies will hardly strike the State off their FDI location list on the basis of this one big stumble. And a data centre is not a typical investment, either, as it requires a large chunk of land, specialised infrastructure, and major support from the national grid – a much greater planning impact than the majority of facilities.

But, unfortunately for regional development, it will certainly cause US companies to be more wary when the Government tries to lure them – as it should and must – to look at regions outside Dublin for investment.

And while Ireland’s strong brand image, especially in the US, will not be undone by a single setback, any repeat could create a potential longer-term issue for the State and its agencies.

Even if the planning process issues here are addressed, as the Government has promised they will be, it is the fact of the rejection that will remain foremost in the US business mind for some time to come.