Hay fever sufferers could really appreciate the value of this data-rich, innovative device 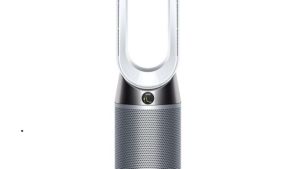 At €550, the Pure Cool is a bit on the pricey side but those who suffer from pollen-triggered conditions could appreciate it

How clean is your house? I don’t mean how tidy the rooms are, but rather, how clean is the air. It’s something we don’t tend to think too much of, unless the air quality is particularly bad. Around our way, that’s also sometimes known as dinner time.

There are plenty of things in the air though that you might not be aware of, from allergy-triggering pollen to organic compounds that all affect the quality of the air in your home. This is where the Dyson Pure Cool comes in.

It’s the updated version of Dyson’s air purifier, a connected device that filters tiny particles from the air and spits out nice clean air in its place.

It comes in two versions: the desk top fan and a tower that is designed to sit in the corner of the room.

The version reviewed here is the tower, so it was banished to the corner of the livingroom for a week to see how it fared.

Like most Dyson products, there is a distinctive design to the Pure Cool. The white and silver styling of the device is in keeping with the previous version; the main difference is the LCD panel on the front.

That LCD panel shows you in real time exactly what the Pure Cool is doing. You can see the changing air quality on a graph – green is good, red is bad – or the amount of pollutants in the air. There are different symbols and codes that you’ll have to learn what they mean, from pollen and dust to volatile organic compounds – basically all the gases and pollutants released by air fresheners and sprays you use around your home. The idea of the latest version of the Pure Cool is that you no longer have to rely on the app. If you want to use the app, it’s simple enough to control the device and see what level of pollutants are being detected in your home.

I developed a morbid fascination with the LCD panel. Forget the latest episode of Westworld; that little panel provided nightly entertainment for a few days. Then I copped myself on, shoved it back in the corner and let it get on with things.

In tests, a Dyson showed how quickly it could clear a room of pollutants, pulling the air towards it to make sure it was getting everything rather than just recycling the same air over and over again. My home was less obviously polluted – the compounds pumped out by scented candles and the odd dinner mishap – but going by the reports on the app, it was certainly working away.

Another benefit of the device is that it doesn’t just blow cold air out the front. Dyson has added a back airflow mode that pumps the purified air out the back, so you don’t get colder in the middle of winter.

The burning question is: do you really need one? You could open a window, and that is considerably less expensive. But the benefit depends on the air quality outside.

If you have allergies – pollen, for example – opening a window won’t do much good. Whatever you gain in fresh air, you lose by allowing the pollen indoors. It’s something that only sufferers of hay fever or other pollen-triggered conditions could really appreciate the value of. As someone who spends most of the summer dosed up with antihistamines, I’m certainly hoping there’ll be a difference when the Irish summer finally shows its face – even if it is three days in August.

This can be a hands-off device – set it to auto and it will keep your air cleaner. As soon as it detects pollutants in the air, it kicks in and cleans them until the air quality reaches an acceptable level. Then you can watch it clear everything while it shows you either on the app or the panel.

This isn’t a cheap solution. Aside from the initial outlay, the filters themselves are quite pricey.

The app control means you can control the device while you are outside the home, or simply keep an eye on its progress. The app tells you what the air quality is like outside too, giving you a more detailed picture.

A bit on the pricey side, but if you have a need for an air purifier, the Pure Cool is easy to use and very effective – if that LCD panel is anything to go by.