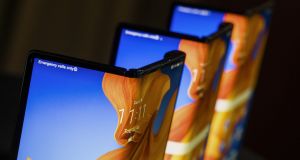 Technology company Huawei has unveiled its latest folding phone, the Mate Xs, and added to its 5G products, indicating the company is set to continue its focus on next generation technology.

The move comes despite an ongoing row with the US over the use of the Chinese company’s technology in 5G networks worldwide, with officials warning that it would jeopardise the US’s ability to share intelligence.

The launch, which was originally scheduled to take place at Mobile World Congress in Barcelona - cancelled due to fears over the spread of coronavirus - also saw Huawei add a next-generation router that supports 5G, and beef up its line of laptops and iPad Pro tablet competitors.

But the initial focus was on the Mate Xs, with its folding screen that transforms from a 6.6 inch phone to an 8 inch tablet. The design has been refined from the original Mate X, which was launched almost exactly a year ago but was only sold on the Chinese market. The new version of the phone, which will retail for €2,500, has an improved hinge and an updated quad camera system that includes a 40MP wide angle camera, a 16MP ultra-wide angle camera, an 8MP telephoto camera and a 3D Depth Sensing Camera. When folded, the phone also has a dual display mode that shows the subject of the photo exactly what the photographer is shooting.

Powered by Huawei’s Kirin 990 5G system on a chip (SoC), the phone also has a bespoke 5G antenna system.

“The HUAWEI Mate X was our first foray into the foldable category and it set the standard for the industry. The HUAWEI Mate Xs is raising the bar further with even more powerful connectivity and integrated user experiences” said Richard Yu, CEO of Huawei Consumer Business Group. “It’s the fastest 5G smartphone of its class.”

Huawei is facing opposition from the US on its plans for involvement in the rollout of 5G networks worldwide. The UK has already approved the use of Huawei’s technology in the 5G network, although it will not be used in core functions or critical national infrastructure. US representatives have already met Irish officials, telcos and business groups in Dublin to express their concerns.

The row between the US and China has led to a crackdown on US companies doing business with the mobile maker, jeopardising the company’s relationship with major partners such as Google. The Huawei Mate 30 was launched without Google services included, which effectively locks it out of the Google Play app store, and the Chinese company has been working towards building its own ecosystem and app store with some of the most popular apps targeted for inclusion.

At the event, Huawei also unveiled plans to develop its app ecosystem further, identifying 100 of the most popular apps that would be considered a priority for Huawei Mobile Services.

Huawei App Gallery is currently available in more than 170 countries and regions, and claims to have 400 million monthly active users.

“’Privacy, under your control’ has always been at the heart of our philosophy,” said Mr Yu. “We place privacy protection and cyber security as the top priorities of all our business operations and strictly implement them in all phases of our products. We also have the strictest privacy and cyber security solutions in Huawei AppGallery.”

The company was keen to emphasise its focus on privacy and security in the app store, perhaps in a repsponse of sorts to the US assertion that Huawei’s 5G technology is “untrustworthy”. The company has consistently denied allegations that its network equipment could be used by the Chinese government for spying purposes.