Review: A good all-rounder, though the screen is just so-so, and the S Pen might fall off 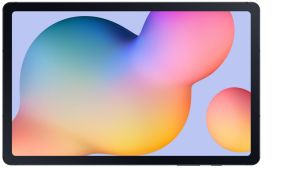 Where to buy: samsung.com

Last summer’s Samsung Galaxy Tab S6 was another shot at the premium market for the company, and, as Android tablets go, it hit its mark. Great screen, a fast chip, and enough space to load it up with apps.

But what if your tastes – and budget – are a little more modest? That’s where the Tab S6 Lite steps in.

Competing with the seventh-generation iPad, the Tab S6 Lite is, as the name suggests, a lighter version of its sibling. That means a few things: lighter in price, but also in spec. At first glance, though, they don’t look a whole lot different. The S6 Lite is, despite its name, a little chunkier than the S6, and it’s heavier too at 470g. There’s not much in the difference but when you are holding the tablet one-handed – reading an ebook or magazine, for example – you can feel the extra weight after a few minutes. On the whole, though, it looks good.

Size is not the most significant difference, though. The screen shows where some of the savings in that price tag have been made. The size difference is minimal – 10.4in versus 10.5in on the Tab S6 – but it’s the technology that’s the real difference. The S6 has a Super AMOLED screen; the S6 Lite bumps it down to TFT LCD. That means it doesn’t look quite as good on blacks, or show colours as vibrantly.

Unless you are a dedicated AMOLED fan, though, or have the two tablets side by side, you can’t really tell the difference between the two technologies, and the S6 Lite’s screen works well. As an e-reader, the text is crisp and clean; for video, the contrast is good if not spectacular, while colour is more than acceptable, although it does fall behind in comparison to the AMOLED. The S6 Lite also doesn’t have the HDR10 capability of the S6, but it’s not the biggest omission.

The S Pen is included and it brings a new dimension to the tablet. You can take notes, doodle or just use it to select items on the screen. However, it’s not quite the same as the S Pen that comes with the S6. That one is bluetooth-enabled, bringing the air gestures that you see with the Note 10, for example. This S Pen has none of that fancy stuff, although it’s not quite a dumb stick; like the previous version of the S Pen, there’s a button on the side that brings up the pen’s menu and some extra functions.

Where the S6 Lite is noticeably different is in its performance. While the tablet comes with an octa-core chip, and handles most tasks with ease, there were times when things slowed a little, particularly with the more demanding applications. Still, for browsing the internet, reading books and doing a little work, the S6 Lite more than stood up to the task.

The camera on the Tab S6 Lite is also a step down from the Tab S6, with a single 8-megapixel main camera and a 5-megapixel selifie camera. That compares with the dual 13- and 5-megapixel main camera on the Tab S6, and the 8-megapixel selfie camera. How much of a sacrifice that is to you depends on how often you will use the camera in the tablet. It’s nice to have that higher-quality front-facing camera, especially with the current focus on video conferencing, but the Tab S6 Lite will still give you some good Zoom moments.

The good
For a mid-range tablet, the S6 Lite is a good option. It’s the right price point and while there have been some sacrifices made, they aren’t anything that makes the tablet unusable. It’s a good all-rounder.

The S Pen is included, so, unlike with the iPad, it is one less expense to have to think about.

The not so good
If you value your screen tech, the bump down to TFT LCD will be a notable step back.

The S Pen may be included but it isn’t quite as well executed as the Tab S6. It simply sticks magnetically to the tablet, which means it inevitably goes missing in your bag. The Tab S6, on the other hand, had a groove for the S Pen to sit into on the back of the tablet. It’s also not quite the same technology. Paying more for the S6 gets you the Bluetooth-enabled pen, with Air gestures. For some people, that extra step up and the convenience of the air gestures – once you get the hang of them – will be worth it.

The rest
It comes with a USB C port, which is standard for premium tablets but not always at the more affordable end of the scale.

The verdict
A good all-rounder in the Android tablet market. But buy the Book case if you want to avoid losing the S Pen regularly.

1 Facebook may pull social media platforms from Europe
2 Aldi empire wracked by family feud
3 Between Covid and Brexit, the economic fallout next year will be profound
4 NatWest confirms review of Ulster Bank as Covid-19 bites
5 Will PTSB be Ulster Bank’s knight in shining armour?
Real news has value SUBSCRIBE