Review: A high-definition camera that is versatile and very easy to use 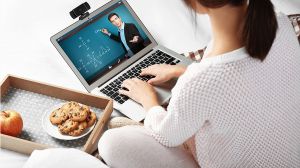 Easy to use and set up, the Papalook AF925 takes a matter of minutes to get started with

It has never really occurred to me that I might need a separate webcam. I have a couple of laptops, plus a tablet and enough smartphones to make the idea of buying a webcam an oddly quaint notion.

Until the country locked down and suddenly we were all doing remote meetings and interviews via Zoom, Skype and Microsoft Teams. All of a sudden, the flaws in the built-in webcams became very obvious. Bad lighting for some, terrible resolution for others, and unsuitable positioning in the case of some of the tablets. If you’ve been communicating via webcams, there’s a good chance that you’ve spent half of it looking at the side of people’s faces, up their nose or at the underside of a chin.

So a separate webcam isn’t looking like such a bad idea after all. It turns out that half the workforce had the same idea, because webcams suddenly joined the list of things that were impossible to get, along with hand sanitiser, home weights, reasonably sized bags of flour and yeast.

The Papalook HAF925 HD 1080 webcam landed on my (remote) desk a couple of weeks ago and, as you might expect, it has been put to good use ever since.

The camera streams high-definition footage at 30 frames per second, promising high-quality footage for your device.

This is plug and play, so once you get it all hooked up to your USB port, you can start using it. There is no software to install or programmes to download; you plug it in and it is ready to go. You may, in your chosen video software, have to switch from the built-in webcam, but that’s about it.

The base works two ways. Unclipped, you can use it to attach your webcam to your laptop. It adapts to the size of the screen, and once it’s clipped on it is fairly secure as long as you don’t try shaking your laptop around too much. Clipped up, you can position the webcam on a shelf or attach it to a tripod. It’s a small detail that makes the AF925 more versatile. The camera itself swivels 360 degrees too, so you can adjust the camera angle as you see fit.

Once active and capturing video, the camera displays two blue LEDs either side of the lens, alerting you to the fact.

Video quality is good. Video calls had a clear picture with relatively little noise compared to the built-in camera on the laptop used to test it. Be careful about light though; too bright an overhead light led to fuzzy spots on the footage, and things like windows were too bright and lacking in detail.

The camera has autofocus, so it will work if you are using video calls for remote exercise classes, for example. The focus kicks in when needed, adjusting itself quickly, so there were very few cases of fuzzy focus to complain about.

The built-in microphone also performed well, picking up voices easily and clearly. The noise reduction worked well, although it would be interesting to see how well it performed in a cafe or busier office environment.

During the test it was chiefly used for Zoom calls, the odd FaceTime chat and a couple of Skype sessions. The camera handled all easily, and switching the camera feed to the add-on was a matter of a couple of clicks.

It works equally well with Windows and Mac devices, although newer Macbooks will need a USB C adapter to connect.

Easy to use and set up, the Papalook AF925 takes a matter of minutes to get started with. It has an adjustable clip so it will fit most – if not all – laptops and you can also use the tripod mount to position the camera where you need it. Because it is widescreen, you don’t all have to crowd in to be seen if you are doing a family chat, for example.

Bright lights caused detail to disappear and areas of the footage to be blown out. There is no way to easily compensate for the over-exposure.

It comes with a 2.0 super large aperture, and the autofocus is reasonably fast so your face always stays sharp in the footage.

If you are looking for another option for your webcam, the Papalook AF925 is a decently priced high-definition camera that is versatile and very easy to use.

When will we travel again? Nobody knows 11:58
Retail sales jump 14% in December after restrictions eased 11:45
Ryanair sought to shoot down Germany’s multi-billion euro bailout for Lufthansa 11:16
Pfizer says vaccine only slightly less effective on S African variant 11:15
Government says it can absorb a record level of national debt amid Covid crisis 10:54