How to succeed as an innovator – without the hype

New book looks at the challenges of being an ‘intrepreneur’ in a large, traditional organisation 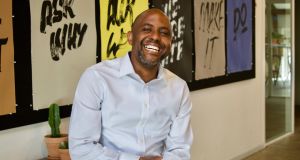 Tendayi Viki is a successful corporate innovator, having worked for large organisations including Unilever, Air France, Salesforce, Rabobank and Unilever.

Apple co-founder Steve Jobs was fond of observing that it was more fun to be a pirate than to join the navy. He was referring to the romanticism and excitement of being an innovative disruptor as opposed to the drudgery of having to work in a large, traditional rules-driven organisation.

Not every organisation can be an Apple or Amazon, of course. Those trying to instil innovation practices in more established organisations face an uphill battle but there are ways to succeed. This is the premise of Tendayi Viki in his new book Pirates in the Navy.

Viki, originally from Zimbabwe and now based in London, is a successful corporate innovator, having worked for large organisations including Unilever, Air France, Salesforce, Rabobank and Unilever. He designed an award-winning lean innovation framework Product Lifecycle for publisher Pearson, and has been shortlisted for the Thinkers50 Innovation Award.

Pirates and navy officers are fundamentally different people, he notes. “The tools used to manage traditional organisations involve exploiting current opportunities, managing efficiencies, business planning and road-mapping. Innovation is different and not so easily managed. The tools that leaders use to drive innovation are not fit for purpose,” he tells The Irish Times.

Innovators working in traditional companies don’t often help their own cause either, he notes, and they need to step outside their bubble and to stop believing their own hype.

“Popular culture celebrates entrepreneurs but intrepreneurs – those innovating inside organisations – need to be careful not to mimic that type of entrepreneurial behaviour. The key superpower of successful intrepreneurs is that they are politically savvy.

“They don’t view the politics of large organisations as an obstacle. They relish overcoming it. They know that they are working on something ground-breaking but they are doing it in a traditional context. The best way to succeed is to build alliances and coalitions which will allow the work they are doing to be protected until it is ready to go to scale.”

Among the key pieces of advice in the book is to find early adopters in the organisation, managers who “buy in” and can help innovators achieve small wins. This involves building credibility and stakeholder alignment. Too often innovators are preachy about their work. Being right about something is all very well but isn’t enough if your ideas are not supported, as he notes.

“You need to create gravity towards your movement. You are not a used car salesman. A lot of innovators tend to bump their heads against their detractors and invest a lot of energy in aggressive persuasion strategies. You need to identify the people who already get it and work with them because ultimately your goal isn’t about working on cool stuff but to get products and services successfully launched in the market and you cannot do that alone.”

Conversely, Viki says that staying below the radar is an alternative strategy that can be considered if the environment is hostile and he talks about using guerrilla tactics to protect and nurse your ideas until they are strong enough to come out in the open. In this scenario, you need to be careful not to spend a lot of money or resources on testing your business ideas.

You also need to be careful about the use of the company brands when engaging with existing customers lest you upset others in your organisation. He also advocates getting a separate budget, ideally categorised as R&D, as this shows up as an amortisable expense rather than an operational one.

Running such an underground movement may seem extreme but hostility to innovation efforts abounds in organisations.

In the book, Viki tells the story of how he once witnessed a team pitching an idea to a chief executive idea for an accelerator programme to incubate start-ups within a company. During the pitch, they told the chief executive they would come to him every quarter with an update. Surprised by this, the chief executive advised them if they waited three months to see him, several managers would have come to him repeatedly over that period to complain about the accelerator programme. That scepticism is often justified.

Viki says he has come across a number of companies that have set up innovation labs and so-called “corporate accelerators” for PR purposes only. In some cases, the budget for these has come from the marketing department, he claims.

The defence for this is that it helps in the war for talent, promoting the company as places in which bright, creative people can flourish. Accelerators also promote lean start-up methods within established companies helping to create a culture of innovation. That’s the theory but in practice this is counter-productive, he says.

“Most labs and accelerators are islands that are set up and managed separately from the main business. The products they create are hardly ever adopted or taken to scale by the main company. In fact, when you dig a little deeper you start to realise that setting up innovation labs or accelerators for PR purposes can actually be detrimental to the innovation culture that you are trying to create.”

Innovation labs, he says, will only be indulged for so long, if they don’t produce tangible results.

“In the end, executives always ask the bottom-line question: how much are we spending on this accelerator and how much return has it produced? Yes, you can claim that you are still learning but even that has a time limit. Eventually the question will return: what have you learnt and what have you produced for the company using those lessons.

Some organisations, he adds, are quietly closing down these labs and accelerators, having experienced innovation fatigue and frustration at the lack of results for the investment they have made. A common gripe is that lean innovation methods are inappropriate for large companies. That’s not the case, he maintains, but it can be a difficult to argue against a backdrop of botched innovation efforts.

Clearly, it’s not easy being a pirate in the navy but as Viki has observed, those who are savvy enough to play by certain rules, can achieve the success they desire.

Pirates in the Navy by Tendayi Viki is published by Unbound.

Desirability – should this be done? Does anyone care about the product or service you are creating? What problems are you solving? Customers have their own problems and aspirations that you need to develop a deep understanding of.

Feasibility – can this be done? Will you be able to pull off the technological breakthroughs that you imagine? In more complex innovations it may not be possible to deliver the products you think you can.

Viability – can it be done profitably? How much will it cost to create and deliver value? How much are customers willing to pay? You need to figure out a viable business model that supports your breakthrough ideas and helps you gain traction in the market.

Adaptability – when should this be done? Pay attention to timing and market alignment. To what extent does your product depend on the successful commercialisation of other company’s innovations. You may get plaudits for your breakthough but fast followers may come behind you and steal the market.