How three Irish start-ups fared on the business rollercoaster

We catch up with companies featured in our New Innovators column 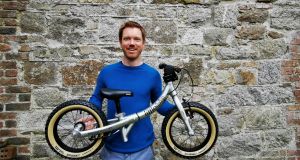 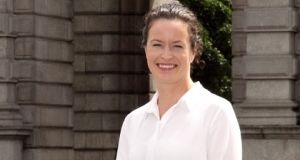 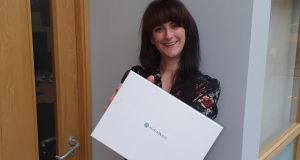 Suzanne Moloney: ‘We’re getting ready to launch our new products and are actively engaging with insurers around the issue of reimbursement’

Entrepreneurs say nothing beats the buzz of starting a business. But that early burst of energy only lasts so long. Without good timing, a sound product, a viable market, money, patience and luck, most disappear without trace. In statistical terms roughly 90 per cent of start-ups fail.

In 2015, Simon Evans set up children’s bicycle company Little Big Bikes. On paper, it looked like David squaring up to the Goliaths of bicycle manufacturing but five years on, having survived a devastating warehouse fire, the company is thriving and exporting 95 per cent of its output. Evans is a design engineer who knows a thing or two about bikes having cycled around the world in 2008 and what makes his product innovative is that it’s a three-in-one design that will last a child for about five years.

It starts off as a balance bike for toddlers. As the child grows the rear of the frame rotates to create a bigger balance bike. Stage three adds a pedal and crank attachment and by the time the child reaches six or seven they are riding a full pedal cycle.

Evans decided to design his own kid’s bike because he wasn’t impressed by the often heavy, cumbersome and poor quality ones on the market. He also noticed that parents regularly bought bikes that were too big so youngsters could “grow into” them.

“LittleBig adapts to the growing child so there’s no need to switch bikes,” he says. “It is very much a real bike, not a toy, and is made from quality parts including an aluminium frame, smooth rolling wheel bearings and a rust proof chain.”

Evans buys the components from China and assembles the bikes in Wicklow where the company employs up to six people depending on demand. This will rise further as Christmas approaches. Average sales per month are around 300 units and so far the bikes have shipped to 77 countries. The UK and US account for around 85 per cent of sales. Evans is now finalising the design for a new product.

It’s called the mini LittleBig and it’s aimed at children from about 18 months. It will be launched in spring 2021.

Asked about the most significant decision he’s made since starting the business Evans says it was deciding to assemble in Ireland. “This allowed me to create local jobs and to be 100 per cent confident about quality assurance. It has also helped isolate us from currency fluctuations and improved my cash flow because I wasn’t paying a chunk of money up front for an order I didn’t get for months.”

When the fledgling medical devices company Croí Valve appeared in New Innovators in 2017 it was based at the Centre for Bioengineering in Trinity College. Since then, it has spun out into a standalone company and has raised more than €10 million in funding. The company’s headcount has increased from two to 13 and in March this year it completed the first in-human use of its device to treat tricuspid valve regurgitation – a heart condition that affects around half a million people a year.

In those with this condition the valve between the two right heart chambers doesn’t close properly and existing treatment options are poor. CroíValve is addressing the deficit with a minimally invasive device that treats the condition quickly and cost effectively with no need for a long hospital stay.

“Surgery is too high risk for these patients so our device is delivered using a technique similar to that used to implant a pacemaker,” explains CEO Dr Lucy O’Keeffe. “Once in place, it works in tandem with the native valve to prevent backflow.”

The company is currently producing the device in-house with some elements outsourced to specialist manufacturers. When volume production begins it is likely to be in partnership with a bigger company. Medical device development, testing and approval takes a long time and the patent for CroíValve was actually filed back in 2014 by its inventor, cardiologist Dr Martin Quinn who holds multiple heart valve technology patents.

However, O’Keeffe says the company’s clinical development is on schedule with testing using temporary implants taking place this year, permanent implant testing slated for 2021 and full scale clinical trials to follow. On the commercial side the next step is to prepare for a new funding round in 2021.

Suzanne Moloney suffers from a condition called Hidradenitis Suppurativa (HS). It’s a debilitating skin condition that affects about 4 per cent of the population worldwide and inadequate dressings are a constant source of frustration for sufferers. To cope with this, Moloney designed her own and in 2018 she took part in the BioExcel medtech accelerator at NUI Galway to take her idea from the drawing board into commercial production.

Since setting up HidraMed 18 months ago, Moloney has raised €1.25 million in funding, increased employee numbers to five and achieved ISO accreditation, CE marking and FDA registration for the company’s first product which is an armpit dressing.

“HS causes skin lesions in the armpit, thigh and groin that require regular dressing. The problem with current dressings is that they leak, move and fall off,” Moloney says. “On top of this the constant application and removal of adhesive backed dressings further damages the already extremely painful skin. With our products patients can change a dressing in less than 30 seconds and most importantly, without any adhesive skin contact. It is also secure so they no longer have to worry about leaks or ‘lost’ dressings.”

HidraMed currently sells online and is targeting its launch product at the estimated 1.6 million women in the US, Australia and New Zealand alone who suffer with HS. The company has also launched a subscription package for dressings and has recently prototyped and developed two new products, HidraWear AX for men and an underwear solution for men and women to help manage the condition in the lower body.

“We were ambitious with our timeline so some delays were inevitable, but overall we have hit the milestones,” Moloney says. “We’re getting ready to launch our new products and are actively engaging with insurers around the issue of reimbursement. This is a really long process, especially in the US, and we’ve been told there’s an 80 per cent chance of being rejected on our first submission. So we will just have to persevere.”