How to . . . screen record on your phone or laptop

Find out how to capture your Mac, iOS, Android and Windows screen 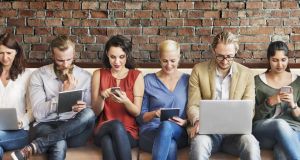 There are many reasons why you may need to record your screen on your laptop or phone. Perhaps it’s for a presentation, or you may be saving those classic game moments for posterity.

Regardless of your reasons, it’s easier to capture your screen to share.

If you are using Windows 10, there is a built in screen recorder tucked away inside the Xbox app. It’s there for obvious reasons: to record your games as you play them. But you can also use it to record content in other windows.

The catch is that it’s only available to machines with certain video cards and it is limited. You can’t switch between apps while you’re recording, for example; it will only record the window you initially begin capturing. But it’s good for the simple stuff - and it’s conveniently right there.

To get the screen capture to work, you need to have the Xbox app open in the background. Open the Xbox app - called Xbox Console Companion - and go to the window you want to record. Press Windows button and G together. A pop up will ask you “Would you like to open the Game bar?”. Check the box beside “Yes this is a game” and the controls for the screen recording will be displayed on screen. Once you are finished recording, the video is automatically saved in your video folder, although you can change that in the Game Bar settings.

If you need to switch between apps or don’t have a compatible graphics card, Game Bar’s screen recording won’t work for you. But there are other free options out there, such as Flashback Express or OBS Studio. Flashback Express has a paid-for version that adds more features, such as the ability to edit your videos, but ìt is simple to use; OBS Studio is open source software and provides more options, including a studio mode.

Both will record from multiple sources, including your webcam, capture all or a selected portion of your screen, but OBS Studio is a little harder to get the hang of.

If you have upgraded your system to MacOS Mojave, you’re in luck: there’s a built in screen recorder that is as easy as taking a screenshot. Press Shift-Command-5, which will give you access to all the controls for capturing video or still images of your screen.

You have options: record the whole screen or just a selected portion for both still and video footage. The video option has the record symbol in the corner of the icon.

Not everyone has moved to Mojave though. If you aren’t planning on doing it or your machine won’t run it, you can still screen record by using QuickTime Player. Open QuickTime Player, and from the menu bar choose File>New Screen Recording.

You can also use OBS Studio on Mac, but you will need to install an extra app to capture audio.

The easiest of all the screen recorders, if you are on iOS 11 or later, that is.

Screen Recording has an icon that resembles, unsurprisingly, a record button - a solid circle in the centre of another circle. To access settings for the app, press and hold the icon; you should get a menu giving you the option to save to your Camera Roll, or broadcast to Skype or Messenger. You’ll also be able to switch the microphone on and off.

When you tap Start Recording, you’ll get a three second countdown. But be warned: it records everything on your screen, as you might expect, including notifications. So remember to mute notifications before you start - just in case.

Android Q will bring a built in screen recorder to Android, but that is still a few weeks off full release (you can get the beta though).

In the meantime, there are some apps to fill the gap. It goes without saying to choose your app carefully; with something as sensitive as complete access to your phone’s screen, you need to make sure the app you choose is legit.

Two good options are AZ Recorder and Mobizen Screen Recorder. Both keep it simple, with a straightforward start/stop menu, both are ad supported, but that’s the price you pay for “free” apps.

1 More than 40% of help-to-buy recipients already had deposit
2 Owner of Dundrum Town Centre to sell prized assets
3 Most workers now expect ability to work from home part-time
4 Help-to-Buy bonus; a taste for working from home; and two landmark deals
5 Stocktake: Is the shoeshine indicator flashing red for stocks?
Real news has value SUBSCRIBE