Tech review: Electric scooter is fun, portable but not that light

While it’s handy and easy to use, €600 is a lot for what amounts to an expensive toy 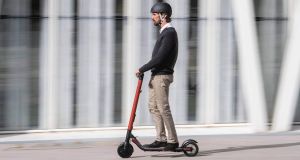 I probably should apologise to our consumer affairs correspondent Conor Pope. I mocked him endlessly when he arrived at The Irish Times office and said that not only had he been commuting on an electric scooter for a piece he was writing, he had actually bought one and planned to use it.

If you have walked around Dublin city centre recently, there’s a good chance you will have spotted someone zooming past you on one of these scooters, usually around the Silicon Docks area of the city where a lot of tech companies are located.

The danger is, of course, that if you are over a certain age, you run the risk of looking like you’re in the grip of a midlife crisis.

Electric scooters have been popping up in cities all over the world, with rental services like Bird and Lime scattering them around the pavements for people to pick up and leave as they like. They are becoming a lot more commonplace, so much so that car company Seat has jumped on the bandwagon – or escooter, to be more precise.

That’s how I found myself pushing an electric scooter through our office, a little shamefaced. And a week later, pushing it back out, a little less shamefaced.

But I stand by my initial assessment. I am under no illusions about how I look on the scooter. I know I look a little bit ridiculous. I’m not 20-something. I have two children who tried to fight each other to get on the scooter, because clearly anything that looks like a bit of craic that comes into our house by rights belongs to them. Sadly for them, while I may be pushing the boundaries on the other end of the age spectrum, they are definitely too young for escooters. You can get up to 25km/h on these things, which is too fast for small children.

And for inexperienced adults, come to think of it. The first time I got on it, I spent half the time mentally apologising to everyone I passed at a sedate 15km/h because I accidentally put it into limited speed mode. The internal monologue went something along the lines of “I know, I look like an idiot! You don’t have to say it. Yes, I’m far too old for this lark” and so on.

The first day, I took the scooter for a walk. Then a ride on the bus. It was only when I was safely in the suburbs that I finally got the courage to get on the scooter – far away from traffic and people who could point and laugh at me.

There is a bit of a learning curve, although it is easier than riding a bike. You have a red button on the left – the brake, use carefully or risk catapulting yourself off – and a blue on the right to accelerate.

In standard mode you can get up to 20km/h; in sport mode, that goes up to 25km. Even at those speeds, there were times when I was overtaken by plenty of bikes.

Speed and battery life is displayed on the small screen on the handlebars; as your charge approaches zero, the power reduces until you have to propel it the old fashioned way. You’ve got lights on the front and the back too, for extra visibility.

Getting on an escooter gave me a different perspective of Dublin’s streets – and other road users. It’s been a long time since I cycled in Dublin, partly because of the weather and mostly because the bus was a lot less hair-raising on a daily basis. Cycle lanes are either non-existent, blocked by cars “just stopping for a second” or parked in them.

Segregated bike lanes – the holy grail as far as I was concerned – were great where they existed. Sadly, they were also rare, on my route at least. Most of the time, you were rattling around on the streets – and I do mean rattling.

But back to the scooter. Be wary of potholes, because if you don’t come off the scooter, you’ll feel like you’re shaking some teeth loose at the very least. When you hit a smooth patch of road though, it’s great, and standing for 30 minutes or so isn’t quite as tiring as you might think.

It is important to know that electric scooters are in a bit of no-man’s land. Legislation doesn’t allow for the use of electric scooters – or electric skateboards, unicycles and other similar devices – on public roads. A review is under way, but it’s hard to call what way that will go. If you buy one, it’s with the caveat that they may not be allowed on the roads in the future.

Under the Road Traffic Act 1961, electric scooters are not legal on public roads. If you are caught using one, you face a fine, being slapped with penalty points, or having your scooter confiscated by the Garda.

This is because they are classed as “mechanically propelled” and therefore require tax and insurance. It’s currently impossible to get either at the moment, so the vehicles are deemed unsuitable for use on public roads.

However, there is some pushback on that. As scooter retailers face falling sales due to the legal confusion, some contend that the fact that some scooters need to get to 5km an hour before the electric motor kicks in means they fall outside the legislation.

Confused? So are a lot of people.

The key here may be “continuous effort”. Once the scooter starts, it requires no other effort from the rider to keep it going.

Contrast that with some electric bikes, where the electric motor is an aid rather than the sole means of propelling the bike. In other words, you need to keep pedalling.

The legislation is in dire need of an update to deal with the latest mobility devices, but fear not: the Department is all over it. Minister for Transport Shane Ross earlier this year asked for the Road Safety Authority to conduct a review of how the vehicles are being regulated in EU member states.

According to the Department of Transport, Mr Ross was given the report in mid-June, and he is now considering whether legislation will be changed to allow the new generation of scooters to legally take to the road.

So would I buy one if they were legal? Probably. Less sweaty than getting on a bike, small enough to throw in the boot of the car, and if you had a bag for it, easy enough to bring on public transport. But €600 is a lot for what amounts to – for now at least – an expensive toy.

The freedom of zipping along on one of these is great. It’s possibly the most fun I’ve had while working. It takes about five hours to charge fully and then you are good to go. It’s portable enough that it doesn’t take up too much space, although a bag is best if you plan to take it on public transport.

You’ll get about 25km in range out of a single charge, but you can get some charge back by messing with the settings in the app and adjusting the energy recovery from when you are gliding.

Other people. It goes without saying that, regardless of your method of transport, you should be considerate to others around you. That means not driving all over cyclists if you’re in a car; pedestrians not doing a kamikaze dash in front of traffic or cyclists; and, if you’re on one of these things, don’t buzz up behind cyclists and frighten the life out of them. Common courtesy. I narrowly avoided being taken out of it by a woman opening her door into traffic. On that occasion, paranoia served me well.

The number of times I smacked my ankles with it: too many to count. Every time I heaved it up on to the path – and it’s portable but not that light – the back swung around and clipped me neatly across the ankle.

The first thing you should do is connect it to the app and put a passcode on the connection. That way you can enable the anti-theft measures – it locks the wheels. It can’t stop someone stealing it because you can just pick it up, but it means it can’t be used as a scooter until you unlock it. And keep an eye on how much mileage you have left.

This is a Segway scooter with some Seat design, so if it looks familiar, don't be too surprised.

Good for short commutes if they were legal, and great fun zip around on.