Technology top of the agenda now for businesses, says Dell 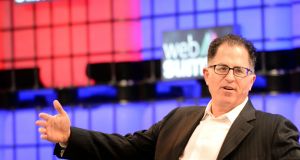 Michael Dell speaking at the Web Summit in Dublin in 2015. Photograph: Eric Luke / The Irish Times

Technology is now top of the agenda for business, as companies eye digital transformation and how it can impact their future.

So said Dell Technologies chief executive Michael Dell, who was outlining the company’s place in ushering in the new era to attendees at the company’s annual conference in Las Vegas.

“All of us, the nerds, the engineers, the techies, we’re at the centre of the conversation the world’s greatest introverts in the spotlight.”

He told attendees everything came down to customers’ data. “If AI is the rocketship, then data is the fuel.”

The company, which was created following the merger of Dell and EMC, said it would also speed up its partner business growth as it broadened its offerings and increased incentives.

“What’s kind of interesting is it’s been about 20 years since IBM declared the post-PC era,” Mr Dell said. He acknowledged that the company have got its predictions slightly off, but said the concept of the expansion of computing to mobile and embedded devices.

Dell has accrued more than $1 trillion on revenue since it was established 34 years ago.

Describing himself as an optimistic about artificial intelligence, Mr Dell said the current pace of change in the tech industry was nothing compared to what was coming. However, he said he was an optimist about human-machine partnerships and artificial intelligence, rather than a “dooms-dayer”. He acknowledged there were risks but said he still remained optimistic that the next era of human-machine partnership would be positive.

“We’re working to share our vision of that better world,” he said, unveiling Dell’s Realising 2030 initiative which offers a look at how emerging technology will reshape our world.

The opening morning of the event also saw Westworld actor Jeffrey Wright take to the stage to talk about his work with Dell Technologies, which resulted in a documentary on post traumatic stress disorder among the US military.

Some 14,000 people are expected to attend to find out how technology can help their firm’s future, with an additional 35,000 watching live streams and on-demand video footage around the world.

“We will showcase ways, big and small, our customers are using technology to change the world for the better, whether through a reimagined process or a reimagined industry. We talk often about technology solving our greatest challenges, and we’re making more progress more quickly than ever before,” Mr Dell said.