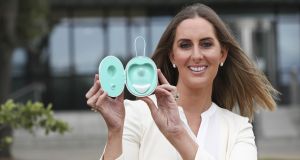 Irish medtech company Coroflo has raised €1 million from private investors as it gears up for a commercial launch of its groundbreaking breastfeeding assistance device in late 2020.

The investment brings total funding to date for the company to €4 million.

The start-up, which is behind what it claims is the world’s first accurate breastfeeding monitor, was recently awarded a €2.1 million accelerator grant from the European Commission under its Horizon 2020 programme.

Led by Rosanne Longmore, Coroflo has developed a revolutionary nipple shield and app that helps mothers monitor the milk flow to their baby in real time. The silicon shield comes with a patented micro-flow sensor embedded which provides accurate details of how much breast milk an infant has consumed.

The device has its genesis in the personal experience of Ms Longmore’s two co-founders, Dr Helen Barry and James Travers.

Coroflo, a finalist in last year’s Irish Times Innovation awards, said it intends to use the funding to invest in production capability and to double staff numbers to 10 people ahead of the commercial launch of the Coro solution in the third quarter of next year. The company is aiming to create new roles across technology, sales, marketing and support.

The company’s university research partners are currently readying themselves to begin trials to assess the impact of the Coro device on breastfeeding rates.

Ms Longmore said there was huge interest in the product ahead of its release with as many as 60 per cent of women reportedly discontinuing breastfeeding sooner than recommended due to concerns over milk supply.

“There’s increased awareness and education around breastfeeding but in terms of products there is nothing that we know of coming out to market. Coro is the only patented product in the world that can measure milk volume accurately. There really is nothing else out there that can allow people to truly monitor how much milk their baby is getting outside of what we’ve developed,” she said.

“There is a huge market out there for the product and we’re getting high levels on queries on this. There are obviously lots of reasons why women stop breastfeeding but by far and away the largest globally is concern over low supply,” Ms Longmore added.

She said the validation gained from receiving the European Innovation Council accelerator pilot grant in July was immense as experienced investors understand “the extreme competitive nature of the fund.”

“Securing the grant has validated our technology, our team and operations and our commercialisation plans,” Ms Longmore said.