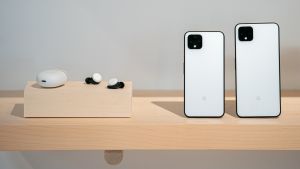 Pixel Buds, Pixel 4, centre, and 4 XL smartphones are displayed during the Made by Google event in New York. Photograph: Jeenah Moon/Bloomberg.

Has there been a phone more leaked than the Pixel 4? It’s certainly up there as a contender. Google’s flagship phone has been in the spotlight a lot lately, with plenty of its features revealed ahead of the official launch.

In fact, it seemed like there was little left for the official launch.

At this stage I’m ambivalent about the notch, but I definitely prefer my phones with as little bezel as possible. Unfortunately, the Pixel 4 XL has enough to go around.

The display is a 6.3 inch OLED display, and if the phone feels a little bigger, that’s down to the design choice of including the bezel. That bezel houses a lot though, including sensors that enable some of the motion sensing features built into the Pixel 4 XL.

Where the display really stands out is in the decision to bump up the refresh rate to 90hz, like the One Plus 7 Pro. That makes for smoother scrolling, better looking games and video and a nicer experience overall. Is it such as a massive change that it makes it impossible to use other phones after it? No but while you are using the phone it certainly feels like a good move for Google.

The caveat here though is that it is limited in what it will work with. Not all content, not all scenarios. It seems dependent on Brightness at least in part. That means bright sunlight good, low light environments bad - at least when it comes to the 90hz.

Delivers on almost everything

Screen aside, the design of the Pixel 4 XL is a little different from its predecessor. Google has finally binned the two tone back and gone for a uniform look on the back of the phone. The camera array is the now the familiar square you’ll see on rivals, but Google hasn’t gone for the flashy design of Samsung and Huawei. The colours are more standard - black, white, orange - and the screen is without the slope that once gave Samsung its distinctive design.

The question is what are people looking for from their phones? Usually it’s a decent camera, software that doesn’t hinder you, a design you won’t constantly drop and a battery that won’t have you reaching for a top-up twice a day.

The Pixel 4 XL delivers on almost all of those. You get what you expect from a flagship phone release. The camera has been improved from the Pixel 3 XL, so you can take great photos with the Pixel 4XL. Night Sight, once of my favourite additions to the 3 XL, is back and better.

Apparently it’s so powerful that you can take decent photos of stars, but since I live in a suburb, light pollution makes that difficult to really put to the test properly. In all other scenarios though, the night shots are excellent so I’ve no reason to doubt those claims. Portrait shots are nicer than before and the addition of features such as a Live HDR mode make it easier to get the shots you really want.

There are only two lenses here - wide angle and telephoto - with Google bucking the current trend for an ultra wide angle lens. I’m not convinced that is the best move, because I’ve grown accustomed to the flexibility of the ultra wide angle, but Google obviously feels strongly enough about it that it is willing to risk it. Time will tell.

One thing Google’s camera set up still lacks is a pro mode, which puts the phone behind Huawei and Samsung, but you may not miss the manual controls all that much.

Aside from the design changes, Google has also ditched the fingerprint reader, using facial scans instead. I’m all for making it easier to get into your phone while making it harder for others to do the same. I’m just not convinced that Google’s version of Face ID is it. If you are going to do it, it needs to work accurately, consistently and fast. Accuracy here was not quite at a level that made it easy or fast to use, with too many rejections for my liking.

Google has also floated a few new ideas for the Pixel 4 XL. MotionSense, which allows you to wave your hand above the phone to control music and alarms seems like it should be a good idea but it’s not quite an essential feature. That doesn’t mean it won’t be in the future though.

The battery is 3700 mAh, which is fine but not spectacular out of the box. There’s all sorts of tech to get it to that point; for me it barely scraped a day. My concern would be that over time, as the phone gets loaded down with apps, that battery life will worsen to the point that you will need a top up to get you through the day.

Great camera and great screen. The 90hz refresh rate is nice but not available across the board. The camera has some features such as the ability to learn friends’ and families’ faces and take the best shots of them, such as while they are smiling and not blinking.

The bezels aren’t it’s nicest look, but you can live with it. More irritating is the battery life, which just about passes but it feels like it should be so much better.

Project Soli is in effect here, so you get gesture control for muting alarms, changing tracks and so on. Not essential, but fun to play around with. The storage is only 64GB or 128GB, and there’s no expanding it with a memory card.

Pixel fans will love the upgrades to the camera, but Google has some fierce competition.

1 Tax and spend: What have FG done for your pocket?
2 Fair Deal nursing homecare leaves little for bills and gifts
3 Pensions row fix could threaten future of State payment, actuaries warn
4 SAP hit by fall in cloud computing orders
5 Will the next decade be a better one for value investors?
Real news has value SUBSCRIBE