Government’s broadband process should be ‘halted’ 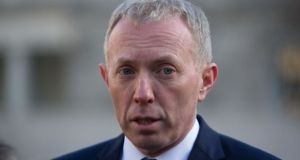 The Government’s broadband procurement process should be “halted” amid the controversy surrounding the final bidder and the high-profile exits of several major industry players, Fianna Fáil’s communications spokesman Timmy Dooley has said.

He was speaking in the wake of a report in the Sunday Times, which indicated that Granahan McCourt, the final bidder left in the race, was embroiled in a fractious lawsuit over the sale of its shares in Irish telco Enet, another company central to the process, when it hosted Minister for Communications Denis Naughten and his officials at a recent dinner in New York.

It has now emerged that Cube Infrastructure Managers (CIM), a Luxembourg investment firm, is suing Granahan McCourt for alleged breach of contract in relation to the sale of its stake in Enet.

CIM had originally been lined up to buy Granahan McCourt’s stake in Enet but the shares were sold to the State-backed Irish Infrastructure Fund (IIF).

Mr Naughten has defended his decision to accept the invitation to a dinner hosted by David McCourt, founder and chairman of Granahan McCourt, while a spokesman told The Irish Times that the Minister knew nothing of the dispute regarding the sale of Enet shares.

Mr Dooley said while he wanted Mr Naughten to explain to the Dáil the context of his meeting with Mr McCourt, a bigger story related to the changing nature of the lead consortium.

“I think the process should be halted before it goes any further,” he said while suggesting that the Minister call in the two previous bidders – Eir and ESB-Vodafone joint venture Siro – and together with Enet begin a dialogue about resolving the current issues.

The State-subsidised scheme to bring high-speed broadband to more than 540,000 rural homes and businesses has been beset with problems since it was first announced in 2012.

The final consortium left in the process was originally led by Enet and included Scottish utility SSE and logistics giant John Laing. In July, SSE pulled out while last month John Laing exited, and Enet now seems to have been relegated to the role of supplier. The consortium which is now led by Granahan McCourt lists Denis O’Brien’s Actavo company as a “key partner”.

The Department of Communications insisted on Sunday night that the lead equity bidder has been a Granahan McCourt-controlled entity from the outset.

“Evaluation of the final tender submission is ongoing and will be allowed the time required,” a spokesman said.

“On conclusion of the evaluation, the department will make a recommendation to the Minister whether to appoint the bidder as preferred bidder and the minister will bring the matter to Government for decision.”

1 Citigroup warns that markets are out of step with reality
2 Should my mam wait for house prices to drop before buying?
3 Chris Johns: Past is another country when it comes to our post-pandemic future
4 US ‘hard seltzer’ drink White Claw launches in Ireland
5 ‘I’m so lucky to be in the Caribbean – a million miles from Derry Girls’
Real news has value SUBSCRIBE