Hallahan to step down as MD of Microsoft Ireland

One of Ireland’s most senior female executives, Hallahan spent 35 years with Microsoft 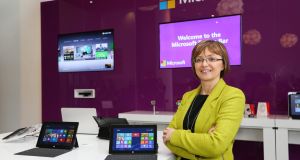 Cathriona Hallahan has announced her decision to step down as managing director for Microsoft in Ireland after eight years in the role.

Staff at Microsoft’s Irish operation were informed of her decision on Tuesday, with the company planning to run a recruitment process and appoint a successor next year.

The Irish woman, who is a chartered certified accountant and a qualified executive coach, will remain at the helm until her successor is appointed.

Ms Hallahan (56) has spent the past 35 years with Microsoft, including about 20 years working for the tech giant overseas.

She is responsible for driving Microsoft’s commercial business on the island of Ireland, and is one of the most senior female business leaders in the country.

Ms Hallahan joined Microsoft in 1986 as employee number 24 in Ireland, where the company now employs about 2,500 staff, with recently announced plans for further expansion here.

She has filled a variety of senior roles in both finance and operations, managing large teams with regional and global responsibilities across a range of functions, including for Microsoft Business Services and Enterprise Services, as well as directing supply chain management, logistics, customer care, and IT and financial support for Europe, Middle East and Africa.

In addition to her Microsoft responsibilities, Ms Hallahan also sits on a number of boards including employers’ group Ibec, UCD’s advisory board and Trinity Business School. She recently joined the board of Irish food company Keelings.

Ms Hallahan told The Irish Times she would seek to establish a portfolio of directorships and other roles on leaving Microsoft, and would consider opportunities in executive coaching.

During her time as managing director, Microsoft opened a €135 million technology campus at Leopardstown in south Co Dublin. “That campus was such a huge milestone for us here and for me,” she said.

Shareholders to vote on €718m Applegreen deal 07:46
Top hedge funds reap biggest gains in a decade during pandemic 07:04
Asian shares near record highs as US stimulus plans offset virus woes 06:53
The rich get richer, vaccine uptake and the family business adapts 06:40
Family businesses are welcome winners in the pandemic 05:47