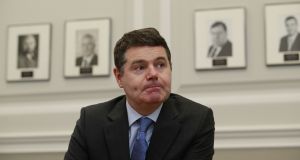 On Thursday the Government should, barring a major surprise, announce a record tax take for the year just gone.

Booming tax revenues led by the rapid recovery in employment and an unprecedented corporate tax windfall has left the public finances in rude health as the economy faces into the unknowns of Brexit and slowing global growth.

The full-year exchequer returns for 2018 will almost certainly eclipse the €58.4 billion collected in 2017. The 11-month tally for November was already over €51 billion.

While the Government will quietly pat itself on the back for presiding over another year of rapid growth, big questions are now being asked about its budgetary policy and whether it is sufficient to insulate the economy against another sharp downturn.

Stable economic growth is something that seems to elude us. We’re either sprinting or stopped at the side of the road with cramp.

The Department of Finance has already warned that the Irish economy is likely to begin showing signs of overheating next year. A sharp uptick in residential construction activity to address the housing crisis has long been seen as the chief overheating risk.

The warning also comes in the wake of the Irish Fiscal Advisory Council’s stinging critique of Government budgetary policy, which was characterised as imprudent in the current context.

And just over the horizon lies Brexit, potentially the biggest upheaval in trading relations across Europe in a generation. Since 2015 the Government has received an additional €3 billion in revenue, over and above the tax bounce from a fast-growing economy, in the form of a corporate tax bonanza and lower interest rate repayments on the national debt.

But this surplus has already been soaked up by increased budgetary commitments, while the two main infrastructural challenges facing the State – health and housing – remain unresolved. This has led to accusations that the Government may have squandered the recovery.