Google Ireland boss: ‘We had to learn like everybody, how do you work from home?’ 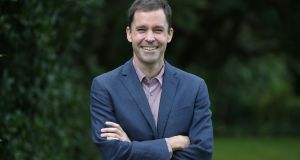 When Nick Leeder was named the new head of Google Ireland, it was in the midst of a pandemic that had shut down the country. Less than two weeks before, then taoiseach Leo Varadkar had stood in front of the press in Washington and announced that schools and non-essential businesses would shut in an attempt to slow the spread of coronavirus. Anyone who could work from home was urged to do so.

For tech companies, this seemed like the ideal moment to show what they had been telling people for years: that the idea that everyone needed to show up to work at the same place, and the same time every day was outdated.

Google had already begun working from home, after a suspected case of Covid-19 had caused it to shut its Dublin offices for what was supposed to be a temporary measure. More than six months later, Google employees around the world are working from home, with a concrete return date not set until mid-2021.

So when Leeder stepped into the top job in Dublin in April, following Fionnuala Meehan’s departure, it was remotely.

But Leeder is no stranger to a bit of chaos. He has moved jobs – and countries – a number of times since joining Google in 2011.

Originally from Australia, he studied computer science in university and worked in media in Australia, with both Fairfax and News Corp. “I was working on the digital side of the house in both of those publishers, helping build new digital models,” he says. “It was a very interesting time to arrive in media, because it was just the start of digital and Google actually didn’t even exist.”

He became responsible for the companies’ respective relationships with Google. So when the opportunity arose to work with the tech giant looking after the Australian and New Zealand business in 2011, he seized it. Two years later, he moved to Google France.

The shift to the northern hemisphere had a personal dimension. Leeder’s wife is French, so not only is he fluent in the language, he is also a French citizen. The job itself, he says, was a once in a lifetime opportunity, and a “complete change of universe”. He joined the French unit at a time when tensions were high between the tech giant and the French authorities. Google had agreed to help French news organisations, as part of a dispute over whether Google should be paying them to display their news content in its searches.

He was also leading the French office at the time of the Paris terrorist attacks that killed 130 people and seven attackers. Employees were at the Stade de France and the Bataclan on the night of the attacks. “We started crisis response meetings through the course of the night and into the next day; it was before we knew how to do crisis response at Google, so we were making it all up on the fly,” he says.

“Our internal security team were trying to trace them [Google staff] down using our technology – phones, apps installed on phones – but our managers and Google community started to try to find everyone themselves. They beat our internal security system. I thought it was an incredibly important signal about the care people were taking of each other.”

Then came the move to Dublin in 2017, when the Australian took up the role as vice president for Europe, Middle East and Africa of large customer sales. He was responsible for the expansion of Google’s relationships with the company’s largest customers in the region.

He has taken some lessons with him. “I thought Australians were, culturally, direct, but when you work with the French, you realise that we’re not. The French don’t want conflict and they don’t mind having direct conversations; in fact they enjoy it, and it’s the way they solve problems,” he says. “I had to really change the way I talked, how I managed; I had to become much more direct.

“The other thing I found really interesting about France is the way trust is built. Trust is harder in France; it takes a number of years to build. But once it’s installed you can do amazing things. In Australia and other countries that are more Anglo-Saxon, trust is probably more easily given initially, but you earn it progressively. In France my sense is that you have none, and then you have it all. You don’t exactly know when that moment will come.”

Trust has been a feature of the past few months between employers and employees, and Google has been no exception. The pandemic has been an eye-opener for Leeder and for the company as a whole. While Google wasn’t opposed to remote working, much of the company’s operations have been based in its buildings in Dublin. The company was, he says, a very nine to five, five days a week operation, pre-Covid.

“We had to make the decision very quickly to move to working from home, which was an enormous piece of work, even for a company which is very digital. Google Ireland is our biggest hub in the region and and we’re not a company which is actually built for work from home – or we weren’t at least,” he says. “The priority was on making sure our people were safe and we were following the government guidelines at every step. Then we had to learn like everybody, you know, how do you work from home?”

But that doesn’t mean the tech giant is planning a wholesale shift to remote working. The recent decision to pull out of the prospective deal to rent the Sorting Office in Dublin jangled more than a few nerves, as people speculated that Google was planning to cut back its operations here in response to the pandemic-induced downturn, or that it was a warning shot for the commercial property sector and soon we would all be remote workers.

Google has a significant footprint in Ireland, more than a million square feet of office space, and two new buildings currently being finished. It is always negotiating multiple property deals, but it doesn’t sign on the dotted line for all of them. When the Treasury Building and Boland’s Quay are done, the company will have space for 11,000 staff in Dublin, but with everyone working from home until the end of June next year, there seemed little need to take on the Sorting Office.

“We wouldn’t wish to have an epidemic of course, and it has caused a huge amount of suffering and pain, but through it we are also learning a lot about what the future will be, and how it can be better,” Leeder says. He believes the office will have its place, particularly to help new employees find their feet in terms of company culture.

So Google is staying put, which should come as a relief to the businesses that depend on its presence in Barrow Street and its surrounds. The pandemic shutdown has shown the role the company can play in the local community too; one project it took on during lockdown was assisting the local parish priest live-streaming Mass on YouTube so he could continue to reach the congregation.

Globally, Google has also been heavily involved in coronavirus contact tracing apps, something that has thrown a spotlight on the company and its privacy practices. But that is how it should be, Leeder says. “The question is, are we doing something useful? If we make a mistake, we’ll get called on it. We’re not perfect, we do make mistakes.”

It comes back to the best advice he was ever given – just do good work. “Google’s a big company, it’s got its own politics and I keep coming back to that, thinking, let’s just do good work, and the rest will take care of itself.”

1 Three Ireland switches on 5G network around the country
2 Former junior minister Michael D’Arcy did not contact ethics watchdog over new job
3 Pilita Clark: The looming legal minefield of working from home
4 State should use Covid-19 impact on building costs to build homes
5 Dublin-based ID-Pal raises €1m in funding as it looks to expand
Real news has value SUBSCRIBE