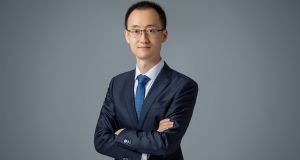 That will include the rollout of 5G in the country, which has already begun.

Mr Yangxu joined Huawei in 2006, and has held a number of senior roles at the company, including sales director for Huawei UK.

Huawei employs more than 500 staff directly and indirectly throughout the country, with sites in Dublin, Athlone and Cork.

Mr Yangxu said he was honoured to help contribute to Ireland’s recovery at a challenging time.

“Huawei Ireland is fully committed to playing an active part in helping to create world-leading digital infrastructure throughout the country, including broadband and 5G, which will be essential for Ireland’s future economic success,” he said.

He takes over the Irish business at a time of uncertainty for the company, which has faced opposition to its involvement in the deployment of 5G networks globally from the US and some of its allies, claiming the company’s ties to China make it a risk to national security. Earlier this year, the UK told mobile network operators they must strip Huawei gear from networks by 2027.

However, the company is set to play a role in the Irish networks, with Eir among the companies that have confirmed they will be using Huawei equipment in their next generation networks.

1 House asking prices rebound but will likely fall again - MyHome
2 Plans for €2bn Dart expansion lure Bombardier to Dublin
3 Will your boss let you work long-term from home – or from abroad?
4 City firms move £1.2tn and 7,500 jobs out of London - EY
5 Google tells workers to return to country where they are employed
Real news has value SUBSCRIBE