Tech giant takes on 2,000 engineering and design staff to better compete with Apple 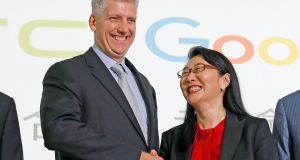 Google has agreed to buy part of smartphone maker HTC’s engineering and design teams for $1.1 billion (€920 million), taking on a cadre of veterans that worked on Google’s Pixel phone and could bolster the US firm’s nascent hardware business.

Alphabet’s Google is taking on some 2,000 employees with experience working on its signature Pixel devices, intended to showcase the best features of the Android software that now powers the vast majority of the world’s smartphones.

The deal also comes with a non-exclusive licensing agreement for HTC intellectual property.

Google will gain tighter control over the design and production of the Pixel and other devices, potentially helping sales. Those gadgets are becoming the pillars of a strategic push to distribute critical software products like its voice-enabled assistant and to better compete with Apple.

The search giant is preparing to unveil a second generation of devices in October, building on a portfolio that runs the gamut from Google Home speakers to Daydream virtual reality headsets.

“The end game here is more flexibility on hardware innovation, which can spur incremental revenue through services enabled by those innovations,” said Jitendra Waral, a senior analyst with Bloomberg Intelligence.

“Google essentially gets more control over its hardware design, it can help them accelerate innovation with its own products and use that as the benchmark for the Android ecosystem to follow.”

Alphabet investors may be concerned about history repeating itself. In 2012, Google paid $12.5 billion (€10.4 billion) for Motorola Mobility, then a leading Android handset manufacturer. In less than three years, Google sold it to Lenovo Group for less than $3 billion (€2.5 billion), while keeping Motorola’s valuable patent portfolio.

Owning Motorola had eroded the search giant’s profit margins and upset other phone makers that relied on Android, Google software that it supplies to handset manufacturers to promote its services.

The HTC transaction however costs a lot less and comes at a very different time – when Google and its biggest rivals are more focused than ever on consumer devices built around new artificial-intelligence and augmented-reality services.

AR demands powerful, expensive cameras and sensors working in sync with software to process and superimpose 3D images on real world scenes. Having different Android partners making their own phones with disparate components makes this task more difficult for Google – especially when Apple can pick one set of AR hardware to marry to its software.

“For Google, HTC is a completely different deal than Motorola,” said Jason Low, a Canalys analyst based in Shanghai. “It needs better control over manufacturing if it expects the Pixel series to compete with iPhones someday.”

Google has also launched its own phones since Motorola, so Android phone makers have got used to their partner as a rival. And some of the biggest emergent manufacturers, such as China’s Huawei Technologies and Xiaomi Corp are now less reliant on Google for services.

The production resources of HTC – which assembled the first Pixel device and was key to the Nexus line – may support its existing phone operation. Greater control of hardware production would also give Google more influence over the distribution of new services such as its voice-based digital assistant.

Google didn’t say exactly how it would retain employees after the acquisition, only that it is working on the details. The company, like many of Silicon Valley’s frontrunners, has a reputation for comfy perks and compensation.

A more Apple-like approach would also let Google steer the Android operating system in its preferred direction. The tech giant has struggled to get handset makers and carriers to ship Android devices with the latest secure software.

The Pixel was designed, in part, to prompt phone makers push out these updates faster. Yet some Android partners are moving ahead with competing software efforts – Huawei linked up with Amazon’s assistant, and Samsung Electronics has its own.

“A team of HTC talent will join Google as part of the hardware organisation. These future fellow Googlers are amazing folks we’ve already been working with closely on the Pixel smartphone line, and we’re excited to see what we can do together as one team.”

Google’s Pixel is far from a top-selling phone. External estimates pegged sales at 552,000 units during its first quarter. Yet selling Pixels has auxiliary benefits for Google, chief among them the boost to its primary sales.

With each Pixel phone it moves, Google doles out less in traffic acquisition costs: it pays money to partners like Apple and carriers to install Google’s search service. That cost has risen steadily, pulling down its sales totals last quarter in particular.

A bigger hardware unit would offset such expenses, Eric Sheridan, an analyst at UBS, wrote in a recent research note. But it also comes with more spending, in maintenance and marketing. Sheridan warned that a HTC acquisition and larger Google hardware unit could hurt the company’s profit margins.