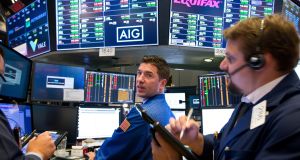 Dataminr’s software scours Twitter and other social media platforms to identify potentially significant or market-moving events – such as a coup or an explosion at a utility plant – and then flags them for investment bank and hedge funds in real time. Photographer: Michael Nagle/Bloomberg

Dataminr, a US technology company backed by an array of leading Wall Street investors and Twitter, is opening a Dublin office next month as part of its European expansion.

The firm is recruiting an initial team of up to 20 and is already hiring engineers and copy editors working in English, Russia and Arabic.

Steven Schwartz, president of commercial markets at Dataminr, told The Irish Times the company’s expansion into Ireland was spurred by the need to serve its growing number of European clients, as well as US clients with global operations.

“Dublin complements our expanding London office, and provides Dataminr with access to world class talent with a global perspective and a range of expertise – in finance, public sector, corporate security, journalism, engineering, and customer support.”

The company said Brexit and the expansion of a number of its largest clients in Dublin was not a factor in choosing to set up in Ireland.

Founded in 2009 by three former Yale roommates, the New York-based company’s client list includes most of the biggest US investment banks and at least half of the top hedge funds, overseeing a collective $1 trillion in assets.

Dataminr’s software scours Twitter and other social media platforms to identify potentially significant or market-moving events – such as a coup or an explosion at a utility plant – and then flags them for investment bank and hedge funds in real time.

The company claims its clients benefitted after receiving preliminary reports of Volkswagen’s emissions scandal three days before its stock price plunged 30 per cent, while oil traders obtained alerts about the death of the king of Saudi Arabia more than four hours before crude prices jumped on the news.

Previous investors in other rounds include Goldman Sachs, Twitter and Fidelity which holds a 10 per cent stake.

The company, which is valued at about $700 million, has raised $180 million to date and has about 300 employees. Other offices are located in Washington, Seattle and Montana, while a London operation was established in 2014. A regulatory address has been registered on Dublin’s North Wall Quay until a formal office is opened in October.

The software is also used by the public sector and emergency services to receive the earliest possible warnings of disasters and other major incidents in order to better protect citizens and help save lives.

In 2014, Dataminr launched a tool for journalists, identifying and flagging up tweets sent on Twitter relevant to users’ interests, helping ensure they are the very first to breaking news.