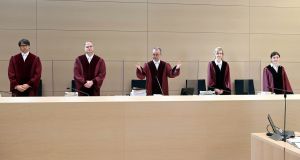 Facebook has insisted nothing will change for its German users after a court injunction on Tuesday that could limit its data collection policies.

Pending a full ruling, the court agreed with the cartel office claim that the US social media giant abuses its market dominance to collect excessive user data, distorts the market and infringes citizens’ privacy rights under EU rules.

After a 14-month transition period, and providing the court final ruling is in line with the injunction, Facebook must offer German users a privacy opt-out. At present, use of the service hinges on granting the company access to data generated while using third-party apps and services with no direct connection to Facebook.

A Facebook spokesman said on Wednesday the company would, in the main proceedings linked to Tuesday’s injunction, continue to defend its position that there is no anti-trust abuse.

“There will be no immediate changes for people or businesses who use our products and services in Germany, ” it added.

Before the new GDPR data rules were introduced two years ago, bundling of data from Facebook and its WhatsApp subsidiary was outlawed by the data protection commissioner in Hamburg, where Facebook’s Germany office is based.

Since May 2018, the new rules transferred all regulation of Facebook to Ireland’s Data Protection Commissioner (DPC), and user data merging is believed to have taken place.

“Facebook keeps growing with practices that are contrary to data protection law,” he said. “Facebook will have to acknowledge that, slowly but surely, the time for this business model is ending.”

Until now, Facebook has argued that users have already provided consent to share all their data with the firm by signing up to the service.

However, many European data protection advocates dispute this legal reading of consent, making it a key bone of contention in other court cases.

On July 16th, the Court of Justice of the European Union (CJEU) will rule on a case involving Irish DPC concerns that Facebook’s data transfer practices to the US are non-compliant with EU law.

1 My aunt never told us that Gran passed away with no will
2 Ryanair and Aer Lingus cut flights as travel restrictions continue
3 Will Revenue come calling with tax bill if inheritance tax threshold falls?
4 Owners of Cork shopping centre sue for €30m after car causes fire
5 Political row brewing if Ireland loses its appeal on Apple
Real news has value SUBSCRIBE