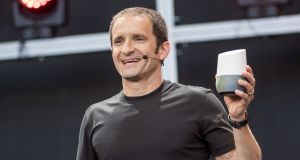 What’s the craic? According to Google’s smart home speakers, the craic always hits 90, as the tech giant launches its smart speakers in Ireland.

Google Home and Home Mini are now available to Irish consumers, making this the fifth country in which the devices have gone on sale. Spain and Austria have also been added to the list of countries that has put the speaker on sale.

Google temporarily moved into the Lansdowne Place development in Ballsbridge for the launch.

The speakers are powered by the company’s voice activated Google Assistant, allowing users to check their calendar, get weather information, look up recipes or play music with a few voice commands.

The launch in Ireland means the speakers are getting some local flavour. Ask Google “what’s the craic?” and you’ll get one of three answers (for now), or discuss the “grand stretch” in the evening. Mayo fans may want to avoid the declaring “Mayo for Sam” in the speaker’s hearing though.

The move increases the competition with Amazon, which got a head start on the tech giant by launching its Echo devices in Ireland at the end of January.

Like the Echo, the smart speaker is activated with a “hot” phrase - in this case, “Ok Google” or “Hey Google”, and can control smart home devices that are compatible with its system.

Google Home and Home Mini cost €149 and €59 respectively, and will be available in retail stores such as Harvey Norman, Power City, DID and Expert, along with Google’s online store.

The company said it did not monetise Google Assistant, or have ads on the platform. However, it did not explicitly rule out any future moves, saying only that it had nothing further to share at this time.