Shares in ZTE plunge as much as 41%, wiping $3bn off value of company

Embattled Chinese telecommunications giant ZTE has agreed to pay $1.4bn in penalties to US government 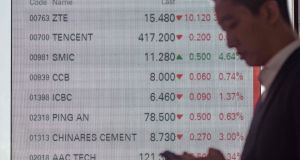 China’s No. 2 telecommunications equipment maker was crippled when the United States imposed a seven-year supplier ban on the company in April. Photograph: Philip Fong/AFP/Getty Images

Investors wiped about $3 billion off embattled Chinese telecommunications giant ZTE Corp’s market value as it resumed trade on Wednesday after agreeing to pay up to $1.4 billion in penalties to the US government.

China’s No. 2 telecommunications equipment maker was crippled when the United States imposed a seven-year supplier ban on the company in April after it broke an agreement to discipline executives who conspired to evade US sanctions on Iran and North Korea.

The ban, which has prevented ZTE from buying the US components it relies on to make smartphones and other devices, will not be lifted until ZTE pays a fine and places $400 million more in an escrow account in a US-approved bank. It was also ordered to radically overhaul its management.

“While the nightmare is now over, ZTE will likely have to deal with many changes,” Jeffries said in a research report, adding that it expects significant near-term selling pressure on the company’s shares. Confirming details of the US deal, ZTE said late on Tuesday it would replace its board of directors and that of its import-export subsidiary ZTE Kangxun within 30 days of the June 8 order being signed by the United States. All members of its leadership at or above the senior vice president level would be removed within the 30-day period, with a commitment that they would not be re-hired, along with any executives or officers tied to the wrongdoing, it said.

The US commerce department can exercise discretion in granting exceptions. According to a Reuters estimate based on company filings and a source with knowledge of the matter, that could result in about 40 senior executives being replaced including its 14-person board, based on its current management structure.

ZTE has more than a dozen senior vice presidents, which is a level below executive vice president, said the company source who declined to be identified as they were not authorised to speak to the media. As part of the US order, the Commerce Department also will select a monitor, known as a special compliance coordinator, within 30 days to report on compliance by ZTE and its affiliates worldwide for 10 years. The coordinator will have a staff of at least six employees funded by ZTE.

“The compliance monitor will be on the same level as ZTE’s CEO and board on compliance matters. The new governance structure will pose challenges for the company’s management in the future,” Zhongtai Securities said in a note.

The Hong Kong-listed shares of ZTE slid as much as 41 per cent to HK$14.98, their lowest in a year, following a two-month trading suspension. Its Shenzhen shares fell by their 10 per cent limit to 28.18 yuan after it confirmed details of the agreement publicised by the US government on Monday. Hong Kong’s benchmark Hang Seng index was down 0.6 per cent by the midday break. During its trading halt, fund managers cut their valuations of ZTE shares, with some lowering valuations of its A-shares to 20.04 yuan per share, or a 36 per cent discount to the closing level on April 16.

ZTE also said in filings on Tuesday that it would work to resume operations as soon as possible after the ban gets lifted, and would republish its first-quarter financial results after assessing the impact of the ban and the settlement agreement. Jeffries said it expected ZTE to pay its penalty in a few days and resume operations next week. The case has become a focus of bargaining talks as Washington and Beijing look to avert a trade war.

US lawmakers have attacked Washington’s agreement with ZTE and plan legislation to roll it back, citing intelligence warnings that ZTE poses a national security threat.

ZTE, with a market value of about $20 billion before its shares were suspended in April, is the world’s No.4 telecom equipment maker after Huawei Technologies, Ericsson and Nokia.– Reuters