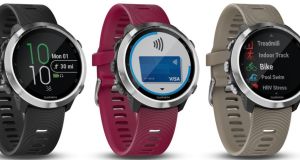 Garmin Pay: customers can select their preferred card for payment from the wallet app on their watch, and tap the watch face on the contactless terminal.

Google Pay, Apple Pay and Fitbit Pay have a new competitor in Ireland, with Garmin Pay entering the market.

Customers of KBC Bank will be able to use the digital payments technology with a compatible Garmin smartwatch, such as the Forerunner 645 and the Vivoactive 3.

The addition of Garmin Pay brings to four the number of digital wallets offering contactless payments that KBC offers its customers.

KBC Bank has more than 262,000 customers in Ireland, and the company has been trying to increase that number by luring younger consumers through offering digital services. It was the first bank to offer both Apple Pay and Google Pay, and it also signed up for Fitbit Pay.

The technology can be used at any point-of-sale terminal that accepts contactless payments. It is powered by FitBit pay and customers can select their preferred card for payment from the wallet app on their watch, and tap the watch face on the contactless terminal. Transactions are verified with a four-digit code.

“For KBC customers, the launch of Garmin Pay is about combining fitness, lifestyle and banking in a way that works for the modern consumer,” said Eddie Dillion, director of innovation at KBC Bank Ireland. “As a society, we’re rapidly moving towards mobile tap-and-go payments, using our watches, fitness trackers and smartphones to do everything from paying for a coffee to applying for a personal loan. The future of banking is changing, and KBC is responding fast.”

The bank’s figures also showed mobile log-ins are on the rise, increasing by 49 per cent year-on-year. Transactions through KBC’s mobile app rose 58 per cent compared to the first quarter of of last year.

According to its annual report for 2017, the number of digital wallet transactions using an Apple Pay, Android Pay or FitBit Pay account linked to a KBC current account increased by 75 per cent. The value of transactions, meanwhile, increased by 82 per cent year-on-year.

“Encryption technology allows us to create what we call ‘digital tokens’ on wearables and other devices,” said Sonya Geelon, head of Mastercard in Ireland. “This means that no card details are shared with retailers when making a payment, because they aren’t even stored on the device. These levels of security allow us to create new ways to pay so consumers have greater choice and greater convenience.”