Move comes ‘from an abundance of caution’, company says 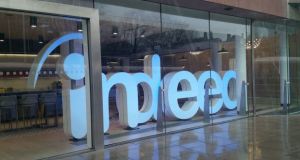 Indeed has asked all staff to work from home until further notice.

Online recruiter Indeed is asking all of its employees to work from home until further notice in a bid to minimise the risk to employees from the spread of coronavirus.

The company, which employs more than 1,000 people across two offices in Dublin, said it was stopping all business travel and cancelling its hosted events organised for the coming weeks.

“Our goal is to minimise the risk to employees and help to lower the probability of the spread of the virus to you, your families and the communities where we operate,” Indeed said in a message sent to all employees. “While we recognise these measures will be inconvenient for some, we will do our best to support you.”

Last month, Indeed asked its entire staff in Dublin, Sydney and Singapore, to work from home for a short period over concerns that an employee at its Singapore office, who recently visited Ireland, had come into contact with someone with the virus.

It is understood that EY had also asked staff in Dublin who had been working on Indeed’s audit to work from home for a couple of days as a precautionary measure.

The Indeed employee and their family later tested negative, and staff returned to the offices. But the latest move shows businesses are still on high alert as the number of Covid19 cases grows globally. Two cases of the virus have been confirmed in the Republic and three in the North.

“While we do not have any confirmed cases of employees with the virus, we continue to act out of an abundance of caution,” the message to employees said. “ We are well equipped to continuously serve our job seekers and our clients in a remote work environment.”

Indeed isn’t the only company moving to remote working. Some staff at Google in Dublin were told to work from home this week after a co-worker reported flu-like symptoms, although it is understood that the person later tested negative for Covid19. Google is expected to reopen its Dublin offices on Thursday. The company, which employs 8,000 people in Dublin, also had a company-wide work from home day on Tuesday to test its preparations for further disruption due to the virus.

A number of major business events have been cancelled due to the spread of the virus, including Facebook’s F8 conference, Google’s I/O developer event and Qualtrics’ X4 events in the US, London and Sydney have also been rescheduled.